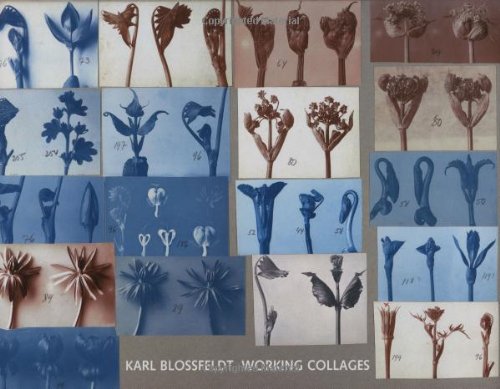 Karl Blossfeldt: Working Collages
by Ann Wilde
Publisher's Description
Long-recognized as a true pioneer of modernism and the New Objectivity, Blossfeldt quickly rose to fame after an exhibition and the subsequent publication in the late 1920s of his photographs of plant forms, an activity he laboriously pursued as an aid to his teaching duties. "The publication of this book is the result of an extraordinary event--the 1997 discovery in Blossfeldt's estate of sixty-one previously unknown collages, in virtually mint condition, of photographic contact prints arranged on large cardboard sheets."--the publisher. Published for the first time, this book represents a significant advancement in our knowledge of Blossfeldt's working habit and stands as a tribute to this seminal and revered figure.

Amazon.com Review
The late German artist Karl Blossfeldt spent much of his career as a sculptor and teacher but broke artistic ground by photographing and isolating plant forms and achieving what was considered objective photography. Blossfeldt made an art historical impact with the release of his 1928 book of photographs, Art Forms in Nature, and was thrust into the limelight as the forefather of the New Objectivity art movement of the 1930s: "The rigorous composition of Blossfeldt's photographs of plant details, like wrought iron shapes on a neutral ground--originally intended for use in his classes on plant modeling--struck his contemporaries as being exemplary for modern photography." Now, his photographic collages of plant forms (discovered in 1977) are shown in their entirety in Karl Blossfeldt: Working Collages. These collages have stirred the curiosity of some in the field because they are so different from Blossfeldt's known work.

An insightful introduction by Swiss art historian Ulrike Meyer Stump explains the importance of the discovery of the collages as well as their possible influence and relationship to other conceptual artists. If you're interested in the beginnings of conceptual artwork, this book is a great chance to wonder and draw your own conclusions about the thought process of an important contributor to photography. -- J.P. Cohen