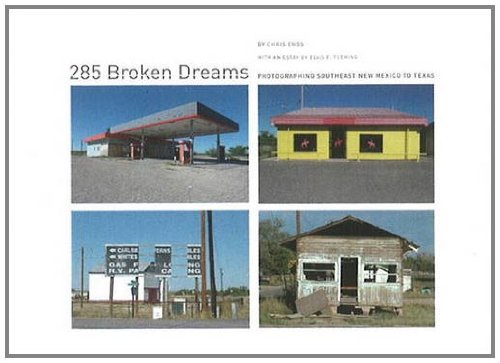 285 Broken Dreams: Photographing Southeast New Mexico to Texas
by Chris Enos
Publisher's Description
Over the course of several years, photographer Chris Enos traveled US Route 285 from Santa Fe through southeastern New Mexico into West Texas, documenting the nearly 500-mile corridor with its vestiges of another, more prosperous and hopeful era.

Southeastern New Mexico, anchored by Roswell, Carlsbad, and the Pecos Valley, is a region of towns and ranchlands that has waxed and waned with waves of economic development and decline. The picturesque remains that characterize the early abandoned towns and ranches reflect the development that gave rise to the Pecos Valley, beginning with the expansion of the Cattle Kingdom from Texas that brought in ranchers, followed shortly by an influx of farmers who cultivated the land along the Pecos River from Roswell southward. The railroads, roads, and military forts brought subsequent waves of residents seeking opportunity, followed by the discovery of petroleum and sulfur mining. Mechanization of farming and the urbanization of America were the forces that collapsed this always poor region.

285 Broken Dreams is an absorbing survey of an area of New Mexico, though affected by economic downturns and fluctuating populations, has steadfastly survived. Enos presents a varied series of photographs of residences and businesses, among them abandoned buildings. These include gas stations, bars, beauty shops, retail shops, retail stores, motels, cafes, and those that give no clue as to what they once were. Historian Elvis E. Flemming contributes and essay about the region's economic waves and population shifts along the highway route.

The photographs provoke many unanswered questions, suggests Fleming, 'Who were the people who lived in these houses and worked in these places of business? What were their dreams, and how did they become broken dreams?'
ISBN: 0890135355
Publisher: Museum of New Mexico Press
Hardcover : 103 pages
Language: English
Dimensions: 8.5 x 11.5 x 0.6 inches