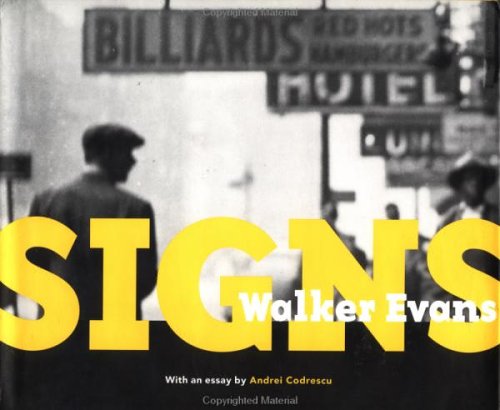 Walker Evans: Signs (Getty Trust Publications, J. Paul Getty Museum)
by Walker Evans
Publisher's Description
As the consummate Modernist photographer, all of Evans's photographs were signs meant to be read. There is, however, a poignancy in these images--literally of signs--that illuminates the photographer's vision. This gem-like monograph, exceptionally printed by the Stinehour Press, is a welcome addition to Evans scholarship.
Amazon.com Review
For many people, Walker Evans's name conjures up visions of the rural American South of the 1930s, where the photographer made some of his most notable images. But signs--marking buildings; advertising grocery prices, churches, and cabarets; communicating political messages--transfixed him throughout his life. Evans was interested in all aspects of signs, from the typography and graphic layout to the messages they conveyed and the objects themselves. He collected nearly as many of them as he photographed and often exhibited actual signs alongside his photos. Andrei Codrescu, in the essay he wrote to accompany the images in Signs, offers a concise explanation of the power of this subject matter. He writes that Evans's era was, "the time of popular writing, of huge advertisements, of lettering that invaded every nook and cranny and even wrote the skyline. America wrote big, with bold new alphabets, in lightbulbs, in neon, in smoke. One could follow the text of twentieth-century America from coast to coast...."

This small book is beautifully designed. The 50 gelatin silver prints selected from the Getty Museum's collection are reproduced on full pages with little or no cropping, and are meticulously documented at the back of the book with notations on dimensions, dates the photos were shot, and printing dates. A wide range of images, from the Photographer's Window Display, in which miniature portraits are displayed behind a pane of glass on which the word studio is painted, to a pair of commercially produced movie posters advertising a double feature of The Man from Guntown and I Hate Women, offers readers perspective on the breadth of Evans's vision. This focused look at an element of Evans's photography helps broaden the understanding of his entire body of work.