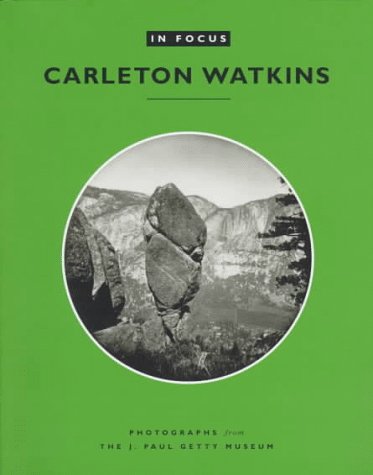 In Focus: Carleton Watkins: Photographs from the J. Paul Getty Museum
by Weston Naef
Publisher's Description
Carleton Watkins is known for his large scale images founding the school of American wetsern photography. This book, and the accompanying panel discussion, explore some of his less well known and odd format images. The reproductions and Peter Palmquist's captions are excellent and contirbute highly to this excellent little collection.
Amazon.com Review
Victorian landscape photographer Carleton Watkins (1829-1916) described his lifelong project in simple terms: to find "the best spot with the best view." However, this self-trained but precocious man, who seemed to delight in giving away much of the work he produced, is now considered one of the most gifted American photographers of the 19th century. Perhaps best known for his pictures of the then newly discovered scenic wonder Yosemite, Watkins made thousands of remarkable, sophisticated, and historically important images that provide an unparalleled visual record of the western United States. In his spectacular depictions of the West Coast's natural resources and the industrial outposts nested within them by way of the California Gold Rush and the Central and Southern Pacific Railroads, Watkins captured the sense of adventure and expansionist enthusiasm of the mid-1800s American imagination.

In the photo Sugar Loaf Islands, Farallons, the combination of grand scale and lush detail draws the viewer into an arresting image in which a single jagged rock emerges from a smoky mist. Only upon closer inspection does one discover that the shiny pebbles at its base are actually about a hundred glistening seals who loll along the beach of a mammoth island. Throughout his 50-year career, Watkins traveled tirelessly under adverse conditions to remote sites, often by mule. He carried cumbersome equipment, including his giant camera, which was custom-made by a cabinetmaker. And he secured his hard-earned images on fragile glass-plate negatives. Watkins's adventuring laid the groundwork for his pioneering in the nascent art and technique of photography. His work commanded wonder and respect from large audiences on both coasts, and the sheer beauty of his pictures helped set a national policy of scenic conservation that preceded the present system of national parks.

Carleton Watkins: The Art of Perception is a companion volume to the first large-scale exhibition to look at this photographer's work from a critical, art-historical perspective. The show originates at the San Francisco Museum of Modern Art and travels to the Metropolitan Museum of Art in New York and the National Gallery of Art in Washington, D.C., through the year 2000. Produced using state-of-the-art tritone printing, this catalog includes 125 of Watkins's best images--stereo cards and multipart panoramic works among them. Accompanying the photographs are compelling and informative essays by Douglas Nickel, associate curator of photography at SFMOMA, and Maria Morris Hambourg, curator in charge of the Department of Photographs at the Met, as well as Peter E. Palmquist's notes on the plates, a list of selected references, and a chronology. --A.C. Smith