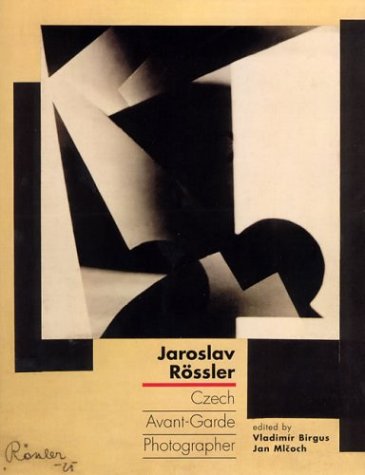 Jaroslav Rossler: Czech Avant-Garde Photographer
by Vladimir Birgus
Publisher's Description
Jaroslav Rössler (1902-1990) was one of the Czech avant-garde photographers of the first half of the twentieth century whose work has only recently become known outside Eastern Europe. Czech photography in the twenties and thirties produced radical modernist works that incorporated principles of abstract art and constructivism; Jaroslav Rössler was one of the most important and distinctive artists of the period. He became known for his fusing of different styles, bringing together elements of symbolism, pictorialism, expressionism, cubism, futurism, constructivism, new objectivity, and abstract art. His photographs often reduced images to elementary lines and shapes that seemed to form a new reality; he would photograph simple objects against a stark background of black and white, or use long exposures to picture hazy cones and spheres of light. From 1927 to 1935 he lived and worked in Paris, producing work influenced by constructivism and new objectivity. He used the photographic techniques and compositional approaches of the avant-garde, including photograms, large details, diagonal composition, photomontage, and double exposures, and experimented with color advertising photographs and still lifes produced with the carbro print process. After his return to Prague, he was relatively inactive until the late 1950s, when he reconnected with Czech artistic and photographic trends of that period, including informalism. This book documents each stage of Rössler's career with a generous selection of duotone images, some of which have never been published before. The photographs are accompanied by texts by Vladimír Birgus, Jan Mlcoch, Robert Silverio, Karel Srp, and Matthew Witkovsky.
ISBN: 0262025574
Publisher: The MIT Press
Hardcover : 164 pages
Language: English