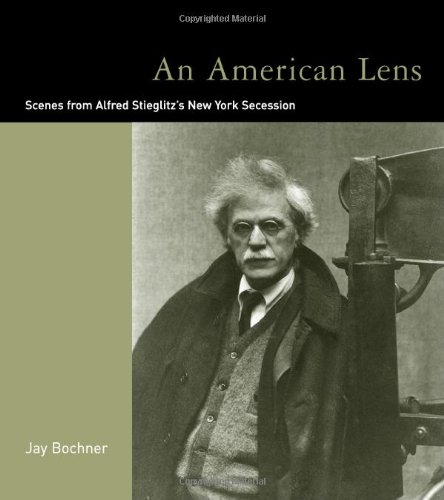 An American Lens: Scenes from Alfred Stieglitz's New York Secession
by Jay Bochner
Publisher's Description
In An American Lens, Jay Bochner looks at a series of milestones in the development of the American avant-garde that capture a pivotal period in artistic consciousness. He focuses on the multiple roles of Alfred Stieglitz - as influential gallery owner, photographer, and impresario of the emerging art scene - at a series of significant moments in his career. These close-ups offer a more intense and expanded understanding of the subject than the more familiar long view.

Bochner uses these scenes to recreate for today's readers the birth of modernism in America: what it was like to be an audience for the art of the early avant-garde. Moving from frame to frame, he shows us, for example, a single photograph by Stieglitz of a snowy night in 1893 and a short description by Stephen Crane of the same snowfall; the preparation, the reception, and the aftermath of the famous Armory Show of modern art in 1913; Gertrude Stein's portraits in prose; New York at the dawn of Dada, with Paul Strand, Francis Picabia, and others; and the intersecting paths of Mina Loy, William Carlos Williams, and Marcel Duchamp in 1917. Bochner also examines Stieglitz's three great photographic series: his photographs of Georgia O'Keeffe, of clouds, and of skyscrapers. These sections of the book include many Stieglitz photos, including some rarely seen portraits of O'Keeffe.

Stieglitz as impresario and artist achieved an almost mythical status, which some recent critics have worked to deflate - casting him, for example, as Svengali to Georgia O'Keeffe's spellbound Trilby. Engaging in neither idolatry nor demolition, Bochner looks instead for the truth about the man and the myth. The scenes from American art in An American Lens create a new version of Stieglitz's biography, allowing us to reread his life and the life of his times by focusing intently on what is visible and not so visible in the art he left behind.
ISBN: 0262025809
Publisher: The MIT Press
Hardcover : 389 pages
Language: English
Dimensions: 8.2 x 9.2 x 1 inches