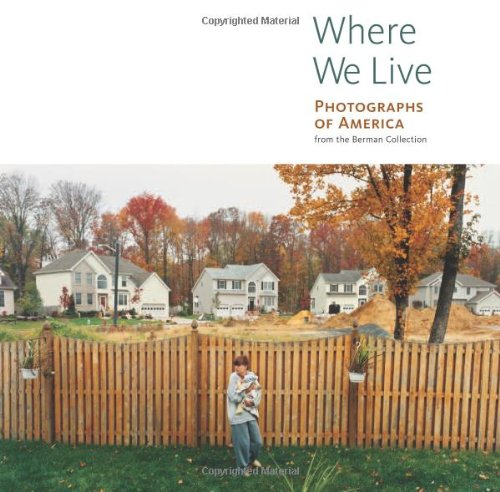 Where We Live: Photographs of America from the Berman Collection (Getty Trust Publications: J. Paul Getty Museum)
by Bruce Wagner
Publisher's Description
Where We Live presents more than 150 images from the Bruce and Nancy Berman Collection of contemporary photographs. From Mitch Epstein's Holyoke, Massachusetts, to Camilo Vergara's Detroit, to John Divola's 29 Palms in Southern California, the images here concentrate on the American landscape and the people and structures that can be found in its vast vistas—and its backyards. The photographs that the Bermans have been drawn to often represent changing American communities recorded by artists whose vision is passionate but unsentimental—a vision that acknowledges the present as fleeting, desolate, and lyrical.

Beautifully reproduced in this volume—which coincides with an exhibition to be held at the J. Paul Getty Museum from October 24, 2006, to February 25, 2007—are works from twenty-four contemporary photographers, the majority working in color, from William Christenberry and William Eggleston to Doug Dubois and Sheron Rupp. Accompanying the photographs are illuminating essays by Kenneth A. Breisch and Colin Westerbeck and an introduction by Judith Keller. An essay by novelist Bruce Wagner captures the mood that runs through this powerful assemblage of photographs.
ISBN: 0892368543
Publisher: Oxford University Press, USA
Paperback : 192 pages
Language: English