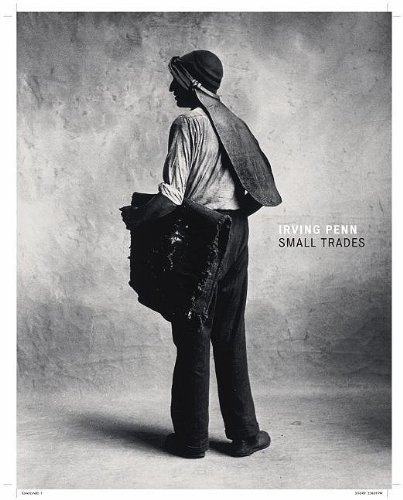 Irving Penn: Small Trades
by Virginia Heckert
Publisher's Description
Photographer Irving Penn (b. 1917) is renowned for his innovative contributions to portrait, still life, and fashion photography, and a career that has spanned more than six decades at Vogue magazine. In 1950, Vogue assigned Penn to photograph workers in Paris, and thus his monumental work The Small Trades began. Created in 1950 and 1951 in Paris, London, and New York, The Small Trades consists of portraits of skilled tradespeople dressed in their work clothes and carrying the tools of their respective occupations.Capturing the humble coal heaver and the crisply dressed waiter with equal directness, Penn's arresting portraits also underscore fascinating cultural differences.

The Small Trades was Penn's most extensive body of work, and he returned to it over many decades, producing ever more exacting prints. Two hundred six unique images from the series are flawlessly reproduced in this book. In addition, the introductory essay describes the history and context of The Small Trades series and its importance to Penn's career and the history of photography. An interview with Edmonde Charles-Roux, the chief editor for French Vogue from 1952 to 1966, who assisted him on the assignment in Paris, provides fascinating insights of the Paris sittings. An exhibition of the series will be on view at the J. Paul Getty Museum from September 9, 2009, through January 10, 2010.