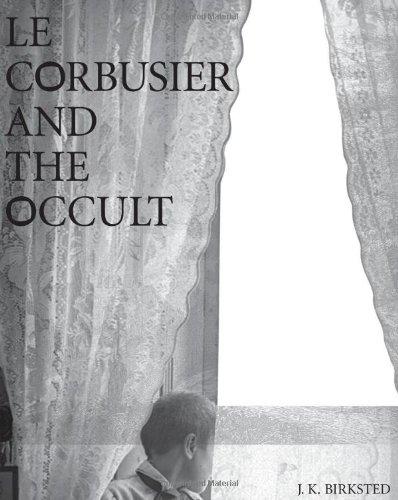 Le Corbusier and the Occult
by J. K. Birksted
Publisher's Description
When Charles-Édouard Jeanneret reinvented himself as Le Corbusier in Paris, he also carefully reinvented the first thirty years of his life by highlighting some events and hiding others. As he explained in a letter: 'Le Corbusier is a pseudonym. Le Corbusier creates architecture recklessly. He pursues disinterested ideas; he does not wish to compromise himself.... He is an entity free of the burdens of carnality.'

Le Corbusier grew up in La Chaux-de-Fonds in Switzerland, a city described by Karl Marx as 'one unified watchmaking industry.' Among the unifying social structures of La Chaux-de-Fonds was the Loge L’Amitié, the Masonic lodge with its francophone moral, social, and philosophical ideas, including the symbolic iconography of the right angle (rectitude) and the compass (exactitude). Le Corbusier would later describe these as 'my guide, my choice' and as his 'time-honored ideas, ingrained and deep-rooted in the intellect, like entries from a catechism.'

Through exhaustive research that challenges long-held beliefs, J. K. Birksted's Le Corbusier and the Occult traces the structure of Le Corbusier's brand of modernist spatial and architectural ideas based on startling new documents in hitherto undiscovered family and local archives. Le Corbusier and the Occult thus answers the conundrum set by Reyner Banham (Birksted's predecessor at the Bartlett School of Architecture) who, fifty years ago, wrote that Le Corbusier's book Towards a New Architecture 'was to prove to be one of the most influential, widely read and least understood of all the architectural writings of the twentieth century.'
ISBN: 0262026481
Publisher: The MIT Press
Hardcover : 424 pages
Language: English