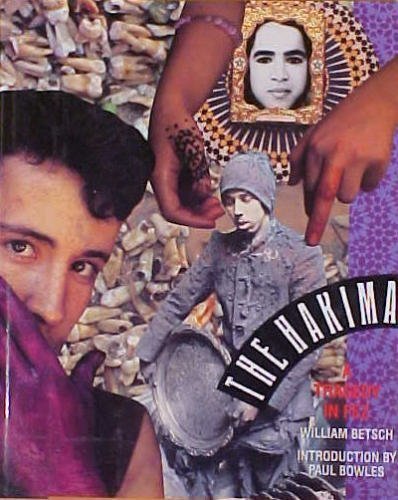 The Hakima, a Tragedy in Fez: Love and Death in Fez
by Paul Frederick Bowles
Publisher's Description
A young Moroccan woman named Hakima jumps to her death rather than prove her virginity. Why? "Attempting to answer these questions, the narrator enters an Islamic world that holds women in thrall to men. Through images and words we are given clues: a fleeing figure, the slip of a knife, a lifted veil. Betsch assembles disjointed perceptions from the maze of gestures, dialogues, and violence around him. Just as the reader is inexorably drawn into the story as an unknowing accomplice, the narrator comes to identify Hakima and her city in the depths of his subconscious. He becomes at once lover, murderer, and victim."--the publisher.
ISBN: 0893812870
Publisher: Aperture Book
Hardcover : 144 pages
Language: English