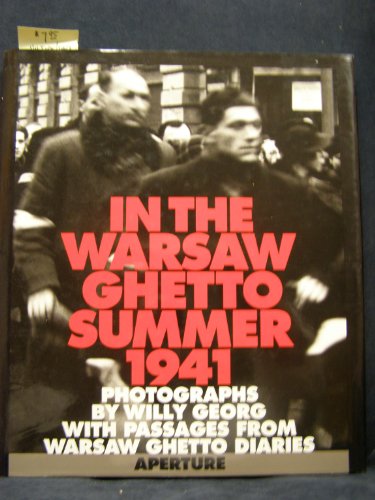 In the Warsaw Ghetto: Summer 1941
by Willy Georg
Publisher's Description
In 1941, a thirty year old German soldier named Willy Georg was ordered by an officer to go into the Warsaw Ghetto. There, he photographed in the streets until he was stopped while loading a roll of film. Though much of the film was confiscated, Georg kept four rolls, discovering them in his files fifty years later. Rafael F. Scharf, who obtained the photographs, has edited a text consisting of excerpts from diaries of the times, Ghetto notices and pieces from the Polish Underground Press. The text in combination with these moving, never-before-published photographs "record the end of one of the greatest Jewish communities of all time, one that had been at the forefront of every major development of Jewish life, culture, and achievement."--the publisher.
ISBN: 0893815268
Publisher: Aperture Book
Hardcover : 111 pages
Language: English