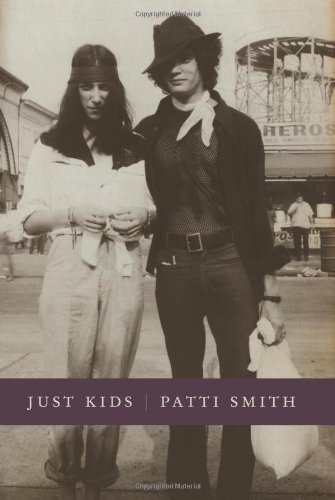 Just Kids
by Patti Smith
Publisher's Description
It was the summer Coltrane died, the summer of love and riots, and the summer when a chance encounter in Brooklyn led two young people on a path of art, devotion, and initiation.

Patti Smith would evolve as a poet and performer, and Robert Mapplethorpe would direct his highly provocative style toward photography. Bound in innocence and enthusiasm, they traversed the city from Coney Island to Forty-second Street, and eventually to the celebrated round table of Max's Kansas City, where the Andy Warhol contingent held court. In 1969, the pair set up camp at the Hotel Chelsea and soon entered a community of the famous and infamous—the influential artists of the day and the colorful fringe. It was a time of heightened awareness, when the worlds of poetry, rock and roll, art, and sexual politics were colliding and exploding. In this milieu, two kids made a pact to take care of each other. Scrappy, romantic, committed to create, and fueled by their mutual dreams and drives, they would prod and provide for one another during the hungry years.

Just Kids begins as a love story and ends as an elegy. It serves as a salute to New York City during the late sixties and seventies and to its rich and poor, its hustlers and hellions. A true fable, it is a portrait of two young artists' ascent, a prelude to fame.
Amazon.com Review
Amazon Best Books of the Month, January 2010: Patti Smith and Robert Mapplethorpe weren't always famous, but they always thought they would be. They found each other, adrift but determined, on the streets of New York City in the late '60s and made a pact to keep each other afloat until they found their voices--or the world was ready to hear them. Lovers first and then friends as Mapplethorpe discovered he was gay, they divided their dimes between art supplies and Coney Island hot dogs. Mapplethorpe was quicker to find his metier, with a Polaroid and then a Hasselblad, but Smith was the first to fame, transformed, to her friend's delight, from a poet into a rock star. (Mapplethorpe soon became famous too--and notorious--before his death from AIDS in 1989.) Smith's memoir of their friendship, Just Kids, is tender and artful, open-eyed but surprisingly decorous, with the oracular style familiar from her anthems like "Because the Night," "Gloria," and "Dancing Barefoot" balanced by her powers of observation and memory for everyday details like the price of automat sandwiches and the shabby, welcoming fellow bohemians of the Chelsea Hotel, among whose ranks these baby Rimbauds found their way. --Tom Nissley
ISBN: 006621131X
Publisher: Ecco
Hardcover : 304 pages
Language: English
Dimensions: 6.5 x 9.8 x 1.1 inches