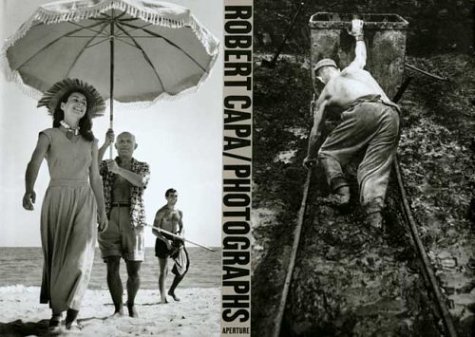 Robert Capa: Photographs (Aperture Monograph)
by Robert Capa
Publisher's Description
This is the first major monograph to focus on the whole range of Robert Capa's work. In addition to the war images for which he is most well known--Death of A Loyalist Soldier most memorably--are deeply humanistic documentary images of the birth of Israel, Parisian street life, and the scenes off of the battle field that define civilian life during war time. Also included are portraits of the photographer's luminary compatriots, Hemingway, Picasso, and Ingrid Bergman, among others.
Amazon.com Review
Robert Capa, whose images of the Spanish Civil War brought home the hideous suffering of that conflict and brought Capa international fame, is the 20th century's most accomplished photographer of warfare. This collection of Capa's work demonstrates that he was more than a war photographer: he was a master of depicting ordinary life in extraordinary circumstances. The volume includes an essay by Cornell Capa, the photographer's brother and the founder of the International Center for Photography, as well as a foreword by Henri Cartier-Bresson.
ISBN: 0893816752
Publisher: Aperture
Hardcover : 192 pages
Language: English
Dimensions: 11.6 x 8.4 x 1 inches