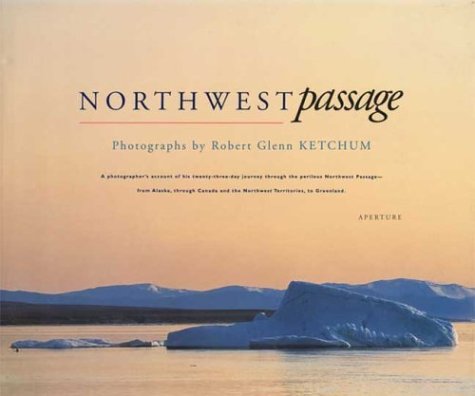 Northwest Passage: A Photographer's Account of his Twenty-Three Day Journey Through the Perilous Northwest Passage -- From Alaska, Through Canada and the Northwest Territories, to Greenland
by Robert Glenn Ketchum
Publisher's Description
By travelling through one the most harrowing ice fields in the world, Robert Glenn Ketchum has generated a much needed photographic record of the grandeur and deadly indifference of nature. His images of towering icebergs and approaching summer storms are terrifying and yet intensely beautiful. This title furthers the artist's catalog of environmentally concerned, gorgeous, monographs.
Amazon.com Review
What can you do with a Pentax and vast amounts of ice and water? If your name is Robert Ketchum, there are no limits, not even the sky. The Northwest Passage, the Waterloo of many accomplished seamen, became the dream--and obsession--of former U.S. Treasury Secretary William Simon, who traversed the elusive and dangerous region in a yacht during the summer of 1994. Ketchum, hired to chronicle the 23-day expedition from Alaska, through Canada and the Northwest Territories to Greenland, produced stunning results; an on-board helicopter enabled him to photograph the terrain as no Arctic image maker before.
ISBN: 0893816760
Publisher: Aperture
Hardcover : 96 pages
Language: English