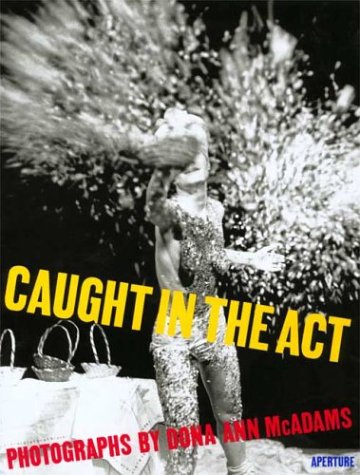 Caught in the Act: A Look at Contemporary Multimedia Performance
by Dona Ann McAdams
Publisher's Description
An irreverent book that transcends documentary reportage and reveals with rare wit and energy a gloriously evanescent cutting-edge form of theater: performance art. This project was published in 1996.
Amazon.com Review
McAdams became eyewitness to a revolution in the theatre world not by design, but by chance. Little did she know when she took her camera into PS 122--an abandoned school turned performance space in New York's East Village--that she was documenting a controversy in the making. McAdams' exclusive images of notorious political artist Karen Finley smearing food on her naked torso are here, along with striking duotones of minimalist composers John Cage and Philip Glass, lesbian actress Holly Hughes and others, many accompanied by texts of their work.
ISBN: 0893816809
Publisher: Aperture
Hardcover : 128 pages
Language: English