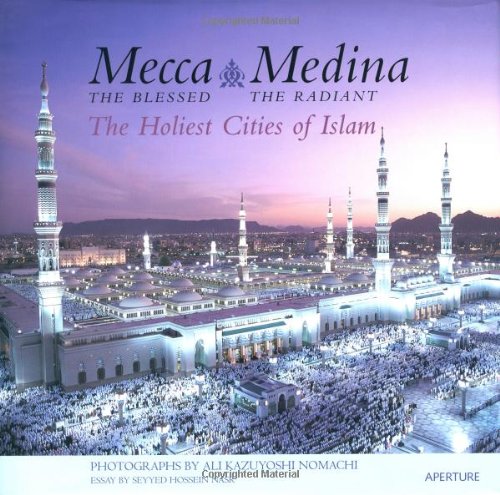 Mecca, The Blessed, Medina, The Radiant: The Holiest Cities of Islam
by Ali Kazuyoshi Nomachi
Publisher's Description
Mecca and Medina, two ancient cities in present-day Saudi Arabia, are sacred to all followers of Islam, one quarter of the world's population. The distinguished Japanese photographer Ali Kazuyoshi Nomachi, a convert to the Muslim faith, was given unprecedented access to both cities, including Medina's Mosque of the Prophet and Mecca's sacred center, the Ka'bah, the remarkable and beautiful building to which more than a million pilgrims travel every year during the holy month of Ramadan.

Nomachi's rich color images include views of the teeming crowds making their annual pilgrimage, or 'hajj;' details of extraordinary Islamic architecture; portraits of faithful worshippers; and aerial and ground-level photographs of desert areas nearby. Accompanying the photographs and numerous archival illustrations, Dr. Seyyed Hossein Nasr's text forms a valuable guide to the spiritual and historical foundations of the Muslim faith.
Amazon.com Review
These photographs of the Muslim holy cities Mecca and Medina, taken by a Japanese convert, Ali Kazuyoshi Nomachi, are something new for most Westerners, and perhaps even for many Muslims. Non-Muslims are never allowed into Mecca, and it is almost unheard-of for religious and government leaders to allow such pictures to be taken. Most of these images were shot during the holy month of Ramadan, when many faithful are in Mecca and Medina on pilgrimage.

Dr. Seyyed Hossein Nasr, professor of Islamic studies at George Washington University, has contributed an essay explaining the history and significance of the two cities. "Mecca and its twin city Medina flourish as the heart and sacred Center of the Islamic universe and will continue to do so as long as there are men and women who accept the truth of Lailaha illa'Llah and Muhammadun rasul Allah," he writes.

Nomachi has worked for National Geographic and Life, and his pictures have the information-packed clarity one might expect. There are fascinating images: literally hundreds of thousands of white-robed believers circling the Ka'bah, Mecca's sacred center; men ritually shaving one another's heads; tired families fasting; small children praying. Nomachi's pictures are oddly cool, but they convey the all-encompassing nature of the faith. Mecca the Blessed, Medina the Radiant will be especially thrilling to those Muslims still planning their pilgrimage.