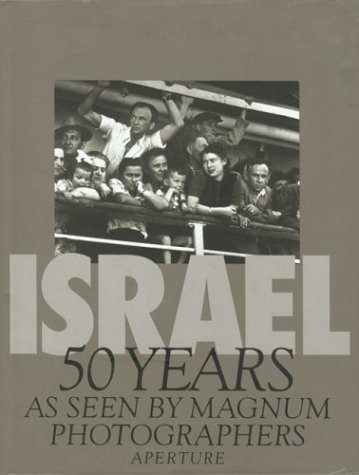 Israel, 50 Years : As Seen by Magnum Photographers
by Magnum Photographers
Publisher's Description
In honor of the state of Israel's 50th anniversary, Aperture has organized this collection of Magnum photographers's images and text.
Amazon.com Review
Magnum, the international documentary photographers' cooperative, was established in 1947, just one year before the founding of Israel. Two of the most famous Magnum originators, Robert Capa and David Seymour, were Jewish American émigrés from Central Europe; they took a special interest in the new state. This anniversary volume, organized by decade and interspersed with written observations by the photographers who were there, is an unflinching record of Israel's first 50 years. The pictures are truly historic: Menachem Begin in 1948, making a passionate speech, is caught with his fist in the air by Capa; in 1951 a baby named Miriam, the first child of a new Jewish settler, is depicted in her Italian baptismal robe; pools of blood congeal in a Jewish classroom; terrified Arab waifs cringe at the approach of Israeli troops; and a beautiful bride marrying a man with a furrowed brow is captured on film by the mischievous Elliott Erwitt in 1962. These are but five of the terribly moving pictures of "the hardest place one can live," as Seymour wrote in 1948. But, he added, "the young sing at night, and even the old ones talk about the future."
ISBN: 0893817740
Publisher: Aperture
Hardcover : 198 pages
Language: English