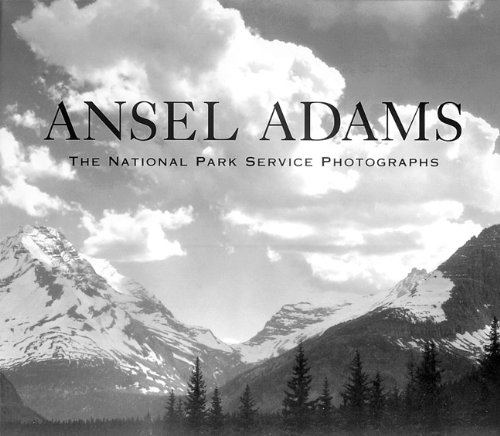 Ansel Adams: The National Park Service Photographs
by Ansel Adams
Publisher's Description
In 1941 the Department of the Interior hired Ansel Adams to photograph the national parks of America for a series of murals which would celebrate the beauty of the country's natural heritage. Unfortunately, the project was cut short by the escalation of World War II, but not before Adams was able to produce this collection of images. For Adams, who was a conservationist as well as an artist, this was the perfect assignment to fulfill his duty as a citizen. The images are taken from Yellowstone, the Grand Canyon, Glacier and Grand Teton national parks, and the Carlsbad Caverns, to name a few of the many locations.
Amazon.com Review
It was the United States Department of Interior that commissioned Ansel Adams to document the country's national parks. Though the project was suspended after just one year because of World War II, Adams was still able to create quite a few astonishingly beautiful photographs of the American landscape. Arresting images of Yellowstone's geysers, the Grand Canyon's ravines, Glacier and Grand Teton national parks' mountains and the southwest's ancient adobes fill the book's pages. Perusing this palm-sized volume is akin to touring the country's natural monuments with this most gifted nature photographer along as a companion.
ISBN: 0896600564
Publisher: Artabras
Hardcover : 144 pages
Language: English
Dimensions: 10.8 x 9.3 x 0.8 inches