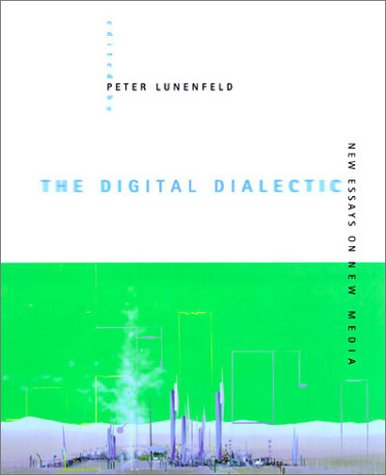 The Digital Dialectic: New Essays on New Media (Leonardo Books)
by Peter Lunenfeld
Publisher's Description
Eleven new essays attempt to sketch out the boundaries of visual and electronic culture as they are changed by new technology.
Amazon.com Review
By definition, the notion of the dialectic--that powerful philosophical tool for understanding the constant ebb and flow of argument, history, and reality itself--is hard to pin down. And so is The Digital Dialectic: New Essays on New Media, a smart collection of mostly academic essays, which aims to identify a dialectic at the heart of the digital technologies currently reshaping the way we see and know the world. Just what that dialectic might be varies from contributor to contributor--as does the quality of the essays, which originated as presentations at a 1995 conference--but Lunenfeld's elegant running commentary does a nice job of teasing out their common concerns.

Grouped in sections with headings like "The Real and the Ideal," "The Body and the Machine," and "The Medium and the Message," such sharp-eyed commentators as philosopher Michael Heim, literary critic N. Katherine Hayles, and new-media auteur Florian Brody grapple with the complicated give and take implied in those opposing terms. They use it to elucidate the pros and cons of cybernetics, Net porn, Neo-Luddism, hypertext, and a host of other ripe cybercultural phenomena. The parts of this book don't necessarily add up to a coherent sum, but their shared commitment to living with the dialectic--i.e., to eschewing the one-sidedness of both utopian and dystopian visions of the digital--sets an invaluable tone. --Julian Dibbell