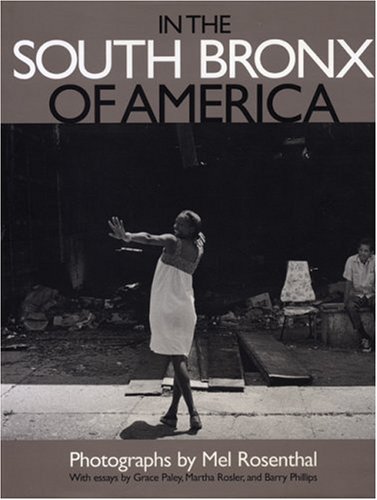 In the South Bronx of America
by Mel Rosenthal
Publisher's Description
During the 1970s, Mel Rosenthal worked in an area of the Bronx targeted by city officials to become an enterprise zone, an area where factories would be built and their owners given special tax privileges. It has now become clear that it was with these officials’ tacit consent that the arsonists’ torches were allowed to do the work usually performed by bulldozers and wrecking crews — at a fraction of the financial cost. The human price was painfully high. When Rosenthal began to document this tragedy, he discovered that the people in the neighborhood did not have pictures of themselves that did justice to their spirit and courage. Wanting to be one of the custodians of the neighborhood’s memory, Rosenthal began to make portraits of everyone who still lived in the area of Bathgate Avenue. He made pictures which he hoped would show both the tragedy and heroism of their daily lives. Rosenthal’s intimate images offer an insightful view of how an innocent neighborhood was willfully and callously destroyed for political advantage and economic gain.
ISBN: 0915306964
Publisher: Curbstone Press
Hardcover : 128 pages
Language: English