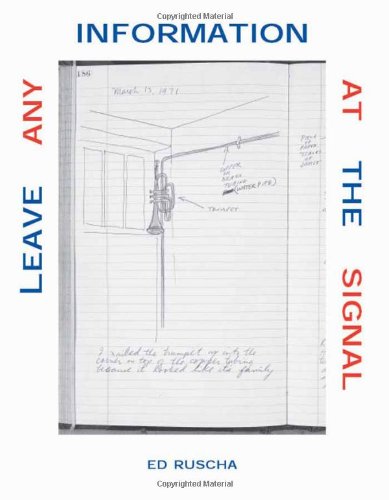 Leave Any Information at the Signal: Writings, Interviews, Bits, Pages (October Books)
by Alexandra Schwartz
Publisher's Description
Ed Ruscha is among the most innovative artists of the last forty years. He is also one of the first Americans to introduce a critique of popular culture and an examination of language into the visual arts. Although he first made his reputation as a painter, Ruscha is also celebrated for his drawings (made both with conventional materials and with food, blood, gunpowder, and shellac), prints, films, photographs, and books. He is often associated with Los Angeles as a Pop and Conceptualist hub, but tends to regard such labels with a satirical, if not jaundiced, eye. Indeed, his work is characterized by the tensions between high and low, solemn and irreverent, and serious and nonsensical, and it draws on popular culture as well as Western art traditions.'Leave Any Information at the Signal not only documents the work of this influential artist as he rose to prominence but also contains his writings and commentaries on other artistic developments of the period. The book is divided into three parts, each of which is arranged chronologically. Part one contains statements, letters, and other writings. Part two consists of more than fifty interviews, some of which have never before been published or translated into English. Part three contains sketchbook pages, word groupings, and other notes that chart how Ruscha develops ideas and solves artistic problems. They are published here for the first time. The book also contains more than eighty illustrations, selected and arranged by the artist.
ISBN: 0262182203
Publisher: The MIT Press
Hardcover : 473 pages
Language: English