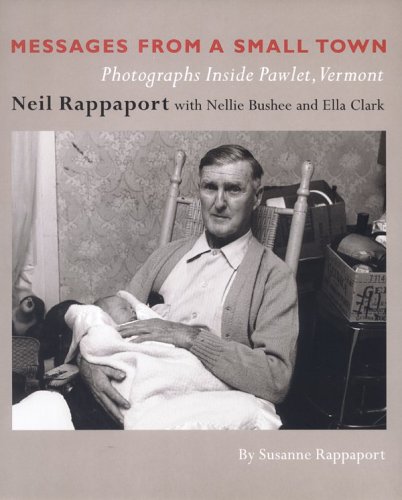 Messages from a Small Town: The Photographs of Neil Rappaport
by Susanne Rappaport
Publisher's Description
When renowned photographer Neil Rappaport died suddenly in 1998, he left behind thousands of images of Pawlet, Vermont, his home for nearly thirty years. Over that span of time, Rappaport had made voluminous photographic studies of the area's well-known slate quarries, of its farms that were rapidly declining in number, and of the town's pastoral landscape. But most of all, he photographed people - individuals, families, groups - at work, at play and at rest, in settings of their own choosing. Those portraits were part of what Rappaport and his spouse, Susanne, called a 'visual census' of the town. They hoped the project would not only collectively portray what one small Vermont town in the late twentieth century looked like, but also help document a way of life that was rapidly disappearing. They felt it was important to pass those messages on to the rest of the world.

Here, Susanne Rappaport has meticulously culled those thousands of images to just over a hundred. She has juxtaposed them with historical photographs taken by two Pawlet women from the early years of the century, and with selections from oral histories she collected from some of the subjects of her late husband's portraits. In addition, she has added her own poignant recollections, mixed with excerpts from Neil's writings.
ISBN: 0916718271
Publisher: Vermont Folklife Center
Paperback : 128 pages
Language: English
Dimensions: 9.1 x 10.1 x 0 inches