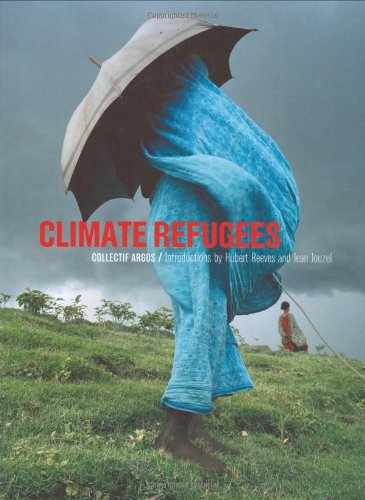 Climate Refugees
by Jean Jouzel
Publisher's Description
We have all seen photographs of neighborhoods wrecked and abandoned after a hurricane, of dry, cracked terrain that was once fertile farmland, of islands wiped out by a tsunami. But what happens to the people who live in these areas? According to the United Nations, some 150 million people will become climate refugees by 2050. The journalists and photographers of Collectif Argos have spent four years seeking out the first wave of people displaced by the consequences of climate change. Using the massive 2,500-page report of the Intergovernmental Panel on Climate Change (IPCC) as their guide, these photographers and writers pinpointed nine locales around the world in which global warming has had a measureable impact. In Climate Refugees, they take us to these places—from the dust bowl that was once Lake Chad to the melting permafrost in Alaska—offering a first-hand look in words and photographs at the devastating effects of rising global temperatures on the daily lives of ordinary people.

Climate Refugees shows us damage wrought to homes and livelihoods by rapid warming near the Arctic; rising sea levels that threaten the island nations of Tuvulu, the Maldives, and Halligen; farmers displaced by the desert's advance in Chad and China; floods that wash away life in Bangladesh; and Hurricane Katrina evacuees in shelters far away from their New Orleans neighborhoods. Added to the devastating environmental effect of climate change is the immeasurable and irretrievable loss of ethnic and cultural diversity that occurs when vulnerable local cultures disperse. It is this often forgotten and tragic consequence of global warming that Collectif Argos painstakingly documents.