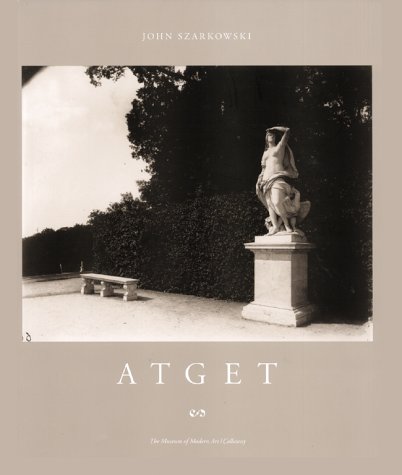 Atget
by John Szarkowski
Publisher's Description
"John Szarkowski, the best writer we have ever had on photography, has just published a wonderful book, a single volume about Atget and photography and about the limits and joys of life. Though the study may at first seem undirected, it is focused by the wisdom of age. Even the beginning of the ackowledgments tells us something important (that 'the thoughts that we hold with reasonable confidence are doubtless the constructions of community'). Readers will discover that apparently casual essays deepen at a single unexpected word, as when Szarkowski, a lover of trees, considers the way Atget's late pictures 'describe the particular ways that trees articulate their forms, effloresce, bear fruit, grip the earet, claim space and light, and fail.' If I were to try to prove to a friend that civilization has not died, and that photography is an integral part of it, I would want to share this book." - Robert Adams, December 15, 2000
Amazon.com Review
In this day and age, we've pretty much taken photography for granted as an integral part of everyday life. There is the immediacy of Polaroids and the limitlessness of disposable cameras, which make a picture taken today a distant cousin to the practice of early photography. Occasionally we need reminding of the roots of photographic image-making, the glass plates, hand-coated emulsion, and massive amounts of other accouterments that were needed to make one image. In Atget, a selection from the lifetime work of legendary French photographer Eugène Atget (1857-1927), we enter the world of early-20th-century photography, which was beginning to bid farewell to the handcrafted picture.

Atget was poised on the cusp between the techniques and materials of early photography and the moment things began to change and modern photography was born. From a laborious and time-consuming process came a much faster method that changed the nature of photography forever. Seemingly overnight, the photograph went from being a precious object to something on its way to being accessible to all. Atget was among the first generation to photographically capture the world of ordinary citizens. While the subject matter was new, he was nevertheless steeped in the tradition of the old-world photograph. A crooked door knocker is captured with loving attention to detail, an air of preciousness still present. Spindly trees, store windows, public gardens--each picture is delicate and romantic. It makes you wonder if absolutely everything was more beautiful in France. Included in the book are insightful commentaries for each of the 100 tritone photographs and five duotones, plus a great introduction by John Szarkowski, former director of the Department of Photography at the MOMA. --J.P. Cohen