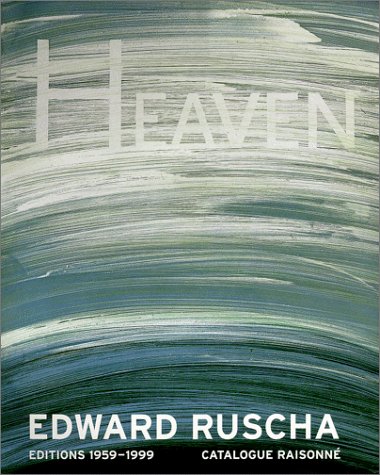 Edward Ruscha: Editions 1962-1999
by Siri Engberg
Publisher's Description
This impressive, beautifully produced catalogue raisonné is the complete record of photographer/painter/bookmaker Ed Ruscha's work. Starting in the early 1960s with an influential series of artist's books--including Twenty-six Gasoline Stations, Royal Road Test, and Every Building on the Sunset Strip.--Ruscha's snapshot, pop-art aesthetic blends thought and humor.
Amazon.com Review
Prominent art critic Peter Schjeldahl once wrote that "to know the art of Ed Ruscha, you should know something about Los Angeles, and the reverse: knowing something about Ruscha's art will help you with Los Angeles." Today Edward Ruscha is considered a major voice in postwar American painting and one of contemporary art's most significant graphic artists. Edward Ruscha: Editions 1959-1999 presents the entire oeuvre of this innovative artist, whose subject and sensibility are uniquely American. Ruscha began his career as a commercial artist, and the visual language of advertising and his interest in typography as both word and image have exerted a profound influence on his art over the years. He says, "I like the idea of a word becoming a picture, almost leaving its body, then coming back and becoming a word again." His works often depict the interplay between bold letterforms and a more atmospheric background, a visual strategy that has become a Ruscha signature. For example, in Hollywood (1968), Ruscha created a panoramic image of low hills dramatically silhouetted against the blazing heat and hazy sky of a California sunset. The word Hollywood, reminiscent of the famous sign, sits directly on the horizon, angled toward us in capital letters and seemingly emerging from the setting sun itself.

This catalogue raisonné was published on the occasion of the exhibition of the same name, originating at the Walker Art Center, Minneapolis, and traveling to the Los Angeles County Museum of Art and other venues through early 2001. Both the catalogue and the exhibition document 40 years of Ruscha's innovative work, and they feature 17 artist's books, such as Twentysix Gasoline Stations (1963); a group of photographs taken on the historic Route 66; and some 300 prints, including a fragrant installation made entirely of paper sheets screen-printed with chocolate. Two large, slim, silvery hardback volumes are presented in a handsome black fabric-covered slipcase. Volume 1 illustrates hundreds of prints, books, and other projects with small, numbered images laid out like a series of film cells or words going by on an LED sign. Volume 2 includes entries for each piece and essays about the prints and artist's books, neither of which have ever been discussed in a publication of this scope. --A.C. Smith