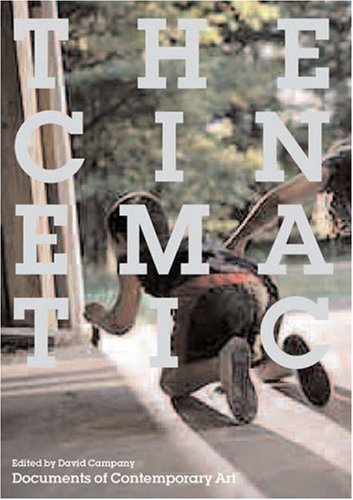 The Cinematic (Whitechapel: Documents of Contemporary Art)
by David Campany
Publisher's Description
The cinematic has been a springboard for the work of many influential artists, including Victor Burgin, Philip-Lorca diCorcia, Stan Douglas, Nan Goldin, Douglas Gordon, Cindy Sherman, and Jeff Wall, among others. Much recent cinema, meanwhile, is rich with references to contemporary photography. Video art has taken a photographic turn into pensive slowness; photography now has at its disposal the budgets and scale of cinema. This addition to Whitechapel's Documents of Contemporary Art series surveys the rich history of creative interaction between the moving and the still photograph, tracing their ever-changing relationship since early modernism.

Still photography—cinema's ghostly parent—was eclipsed by the medium of film, but also set free. The rise of cinema obliged photography to make a virtue of its own stillness. Film, on the other hand, envied the simplicity, the lightness, and the precision of photography. Russian Constructivist filmmakers considered avant-garde cinema as a sequence of graphic 'shots'; their Bauhaus, Constructivist and Futurist photographer contemporaries assembled photographs into a form of cinema on the page. In response to the rise of popular cinema, Henri Cartier-Bresson exalted the 'decisive moment' of the still photograph. In the 1950s, reportage photography began to explore the possibility of snatching filmic fragments. Since the 1960s, conceptual and postconceptual artists have explored the narrative enigmas of the found film still. The Cinematic assembles key writings by artists and theorists from the 1920s on—including László Moholy-Nagy, Pier Paolo Pasolini, Victor Burgin, Jeff Wall, and Catherine David—documenting the photography-film dialogue that has enriched both media.