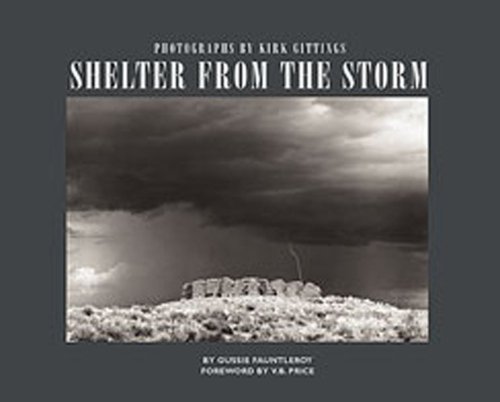 Shelter from the Storm
by Kirk Gittings
Publisher's Description
Kirk Gittings has made his living as an architectural photographer for more than 20 years, yet much of his fine art as well as commercial work can be said to involve images of home. Home in the usual sense of residential structures, but also churches as home for the spirit, and Ancestral Puebloan ruins as the home of ancient peoples of the Southwest. In each case, the 55-year-old Albuquerque-based photographer captures the essence of true home: the implied and deeply meaningful presence of human activity – and shelter for that activity – even while actual figures are almost never included in his imagery.

Gittings has been at home in New Mexico for most of his life. The son of an Army radar technician, who later transferred to the Air Force, he lived on an isolated, expansive mesa west of Albuquerque from third grade through high school. He spent countless boyhood hours exploring eroding mounds that once were Puebloan ruins near the Rio Puerco. He pondered over petroglyphs scratched into the rock face of volcanic outcroppings. These things fired his early imaginings about the people who once inhabited this land – people with whom he felt a distant yet distinct kinship after learning that two of his 18th-century ancestors were married to Native American women.