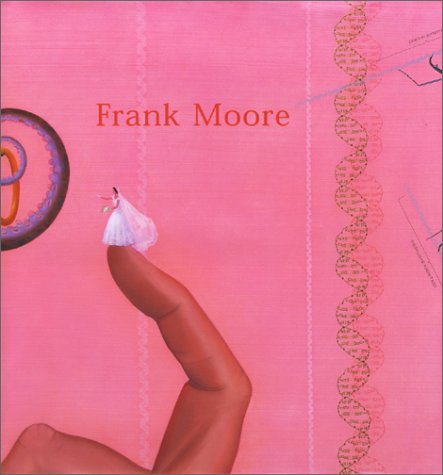 Between Life & Death
by Frank Moore
Amazon.com Review
Science and nature live in a sometimes indelicate balance in the rueful, sexual, and often disturbing work of American artist Frank Moore, who died in New York City in April 2002 on the cusp of worldwide acclaim. Between Life & Death is the breathtaking, oversized first monograph on the life's work of this artist who battled AIDS (and often the medical establishment) for 20 years.

Moore had a lifelong interest in art and science, but it was his exploration into surrealism while on a long residency in Paris that truly informed his art, allowing these divergent images to coexist so harmoniously. The increasing devastation of the worldwide AIDS crisis throughout the 1980s profoundly and irrevocably changed Moore's life as well as his work. Personal losses began to affect his work: health and ecology merged as a triumphant theme in most of these 73 paintings, many of which can be seen in some of the world's most important museums and galleries.

Beautifully designed and printed, Between Life & Death is a fitting tribute to this artist who both painted about his time and pointed to problems of our time. As Robert Glück writes in his foreword, "Wonder can be a form of activism. Moore develops a language of wonder, foursquare, wide-eyed. He paints his subjects with a highly controlled palette: the modulation of warm and cool blues. Mary's mantle is the blue of contemplation; Der Blaue Reiter is the blue of mystical nature; Miles Davis's Kind of Blue is a still lake of sound. I think Moore's blue is the color of our dear planet, our bright organism, a blue of compassion and wonder." --Charles Decker

'Say I live in a Frank Moore painting. The difference between my life and death would be a distinction only on one level. From the point of view of the countless viral particles, fungal spores, and bacteria that swarm in each breath I take and across every surface I touch, my death might be as incidental as some exploding nova would be to me as I write this. Or my death might equal the extinction of an entire species.... There is no distinction between my social life and the earth's other events. 'I am nature,' said Jackson Pollock. Frank Moore says, 'New York is a glittering multicelled, accreted structure-as much an expression of our species as a coral reef is an expression of coral polyps.'
-Robert Gluck

In 1977 Frank Moore took a freighter from Montreal to Santander, Spain. He traveled through Spain, France, and Morocco, finally settling in Paris, where he obtained a residency in the Cite des Arts. Upon his return to New York, Moore began a decade-long involvement with modern dance, theater, film, and video that paralleled his development as a painter. The increasing devastation of the AIDS crisis through the eighties profoundly and irrevocably transformed his life and work. His work was included in the 1995 Whitney Biennial and is included in the collections of the Whitney Museum, the Museum of Modern Art, and the Albright Knox Art Gallery.
ISBN: 0944092977
Publisher: Twin Palms Pub
Hardcover : 112 pages
Language: English
Dimensions: 1.2 x 0.1 x 1.3 inches