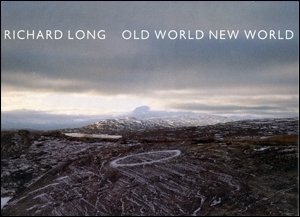 Richard Long: Old World, New World
by Richard Long
Publisher's Description
This classic Long title was published by Anthony d'Offay Gallery, London in 1988, and ably present and discusses Long work. "The first thing that seems to distinguish Richard Long's work when one tries to write about it, is its capacity to resemble a smooth round stone. Each aspect slides imperceptibly into another. Wherever you begin, before you have got very far, you find yourself discussing something else. There is clearly an organic philosophy which binds it together, but there is also a lightness of touch and a magic quality which defy investigation. Long has often emphasised the simplicity of his undertaking, comparing it on one occasion to the way Samuel Beckett's hero Molloy kept his sixteen sucking stones in his pocket and just moved them around, because it seemed the right thing to do. And indeed Long has much in common with Beckett, most antiegotistical of writers, who shuns enquiries about himself and insists his readers look at his work for what it is."-from the essay by Anne Seymour.
ISBN: 0947564209
Publisher: Distributed Art Pub Inc (Dap)
Hardcover : 68 pages
Language: English