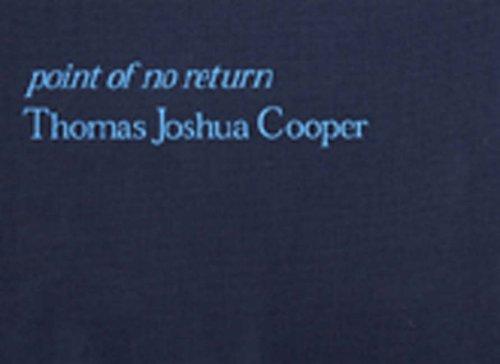 Thomas Joshua Cooper: Point of No Return
by Thomas Joshua Cooper
Publisher's Description
Thomas Joshua Cooper (born California 1946) is one of the world’s most celebrated and distinctive landscape artists and photographers. From 1969 Cooper has worked with a nineteenth-century field camera, mapping the modern landscape in exquisite black and white photographs in the tradition of the great pioneers of American photography such as Timothy H. O’Sullivan. Cooper’s most ambitious project is The World’s Edge – The Atlantic Basin Project, an epic endeavour begun in 1990 to map the extremities of the land and islands that surround the entire Atlantic Ocean. Published to coincide with an exhibition of the same name at Haunch of Venison in October 2004, point of no return marks the completion of Part I of this project, with the first showing of photographs mapping the western, northern and southern points of the continents of Europe and Africa. The works explore the boundaries of human civilization, both temporal and physical. Features essay by Duncan Macmillan, Professor of Art History at the University of Edinburgh, and artist interview with Nick Hackworth
ISBN: 0954067193
Publisher: Haunch of Venison
Hardcover : 140 pages
Language: English