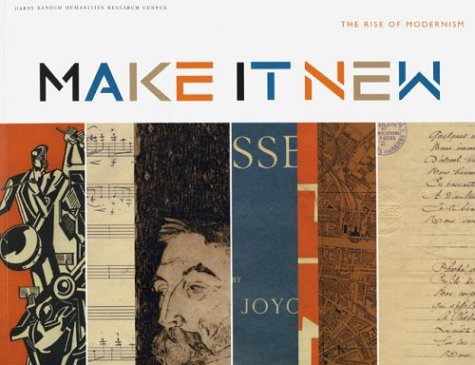 Make It New: The Rise of Modernism
by Kurt Heinzelman
Publisher's Description
What was Modernism, and why does it still matter? The term itself first gained currency in the 1930s, describing a kind of art that already may have peaked, some would say as early as 1922. Whatever its ups and downs in its own time, as the novelist Julian Barnes claims in one of the twenty essays commissioned for the present volume, Modernism never vanished. It remains our immovable feast. Modernism was international in scope; it left its mark on all genres, from literature and painting to opera, dance, and architecture; it pushed the boundaries of what was artistically possible and aesthetically important; and finally, for all its destructive urges which it shared with the century itself, it was also celebrative. This book is a response to the exhibition of the same name that opened at the Harry Ransom Center in October 2003. It includes original essays by such noted writers and artists as Russell Banks, Anita Desai, David Douglas Duncan, Elizabeth Hardwick, and Penelope Lively, which offer fresh perspectives on important Modernist figures, including William Gaddis, Ezra Pound, William Faulkner, E. M. Forster, Paul Robeson, Virginia Woolf, Henry James, Joseph Conrad, Frank Lloyd Wright, and Le Corbusier. In addition, essays by leading scholars in literature and art history focus on specific artifacts included in the exhibit. As the Center's Director, Thomas F. Staley, puts it in the Foreword, 'Ours is an attempt not of definition but of discovery and rediscovery.' Book and exhibition permit both reader and viewer to experience the textures, structures, and resonances which made the first part of the twentieth century so innovative that its art is still virtually synonymous with what 'newness' means.
ISBN: 0292702841
Publisher: Harry Ransom Humanities Research Center
Paperback : 156 pages
Language: English
Dimensions: 11.9 x 9.9 x 0.4 inches