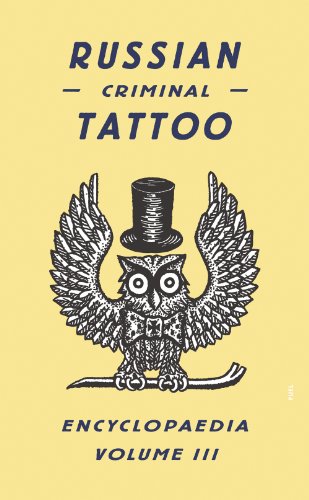 Russian Criminal Tattoo Encyclopaedia Volume III
by Damon Murray
Publisher's Description
This final volume of previously unpublished drawings and photographs completes the Russian Criminal Tattoo Encyclopaedia trilogy. Danzig Baldaev’s unparallelled ethnographic achievement, documenting more than 3,000 tattoo drawings, was made during a lifetime working as a prison guard. His recording of this esoteric world was reported to the KGB, who unexpectedly supported him, realizing the importance of being able to establish facts about convicts by reading the images on their bodies. The motifs depicted represent the uncensored lives of the criminal classes, ranging from violence and pornography to politics and alcohol. A medieval knight is surrounded by the severed heads of his enemies, a naked woman simultaneously services a man and two dwarfs, a crying President Gorbachev grips a human bone between sabre-like fangs, a group of angels drink vodka with God on a cloud—the meanings of these arresting images are explained to the uninitiated eye. Sergei Vasiliev’s graphic photographs show the grim reality of the Russian prison system and some of the alarming characters that inhabit it, while the illustrated criminals of Russia tell the tale of their closed society. This last volume in the trilogy includes an introduction by historian Alexander Sidorov exploring the origins of the Russian criminal tattoo and their various meanings today.
ISBN: 0955006198
Publisher: FUEL Publishing
Hardcover : 400 pages
Language: English
Dimensions: 5.2 x 8.7 x 1.1 inches