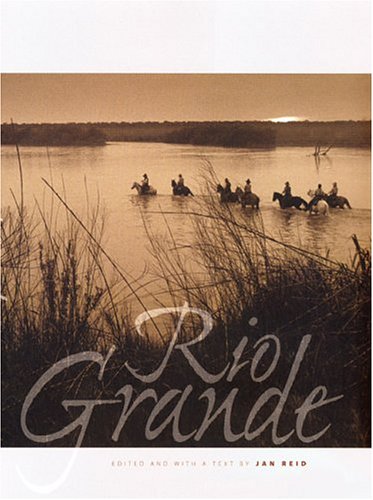 Rio Grande
by Jan Reid
Publisher's Description
The liquid lifeline of an arid land, the Rio Grande has always been a vital presence in the American Southwest and Northern Mexico. A source of human sustenance for at least 15,000 years, the river has also been a site of conflict ever since exploring Spaniards first crossed its channel to colonize the Native Americans. Today, it is one of the frontiers in the war against terrorism in the Middle East. Yet the Rio Grande has a life independent of the people who use it as a border, or a hiding place, or an ever-diminishing source of irrigation water. This autonomous life of the river is what the writers and photographers included in this book seek to capture. Rio Grande explores the ecology, history, culture, and politicization of the river. Jan Reid has assembled writings by an astonishing array of leading authors—Larry McMurtry, Tony Hillerman, Paul Horgan, Charles Bowden, John Graves, Woody Guthrie, John Reed, John Nichols, Robert Boswell, James Carlos Blake, Elena Poniatowska, William Langewiesche, Molly Ivins, Dagoberto Gilb, and Gloria Anzaldúa, to name but a few—who ponder the river's historical and contemporary meanings through short stories, essays, newspaper and magazine articles, and excerpts from novels, histories, memoirs, and nonfiction reporting. Reid also adds his own reflections on the river, drawn from years of traveling the Rio Grande, talking to its people, and conducting archival research. In addition to the fine writing, historical and contemporary photographs by such well-known photographers as Laura Gilpin, Russell Lee, Robert Runyon, Bill Wittliff, W. D. Smithers, James Evans, Frank Armstrong, Ave Bonar, and Alan Pogue create a stunning visual record of the stark beauty and elemental lifeways of the Rio Grande. As a whole, these voices and visions confirm the river's significance, not only as a real place, but even more as an object of the mythic imagination. Jan Reid, of Austin, Texas, is the author or coauthor of seven books, including The Improbable Rise of Redneck Rock, Revised Edition; Boy Genius: Karl Rove, the Brains Behind the Remarkable Political Triumph of George W. Bush; and The Bullet Meant for Me: A Memoir. He is a founding contributor and writer-at-large for Texas Monthly and has also written for Esquire, the New York Times, Men’s Journal, GQ, and many other publications.
ISBN: 0292706014
Publisher: University of Texas Press
Hardcover : 361 pages
Language: English
Dimensions: 7.3 x 9.9 x 1.2 inches