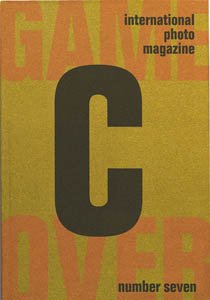 C International Photo Magazine 07
by Elena Foster
Publisher's Description
The issue 7 of C PHOTO, contains works from Middle Eastern photographers. 2008 is the last year of Polaroid film production. C PHOTO dedicates its Archive section to a review of the fertile visual legacy of the last 50 years.

Collector Images from Arab Image Foundation which has collected and preserved most of the Middle East's visual memory from the 19th century to the present.

Archive THE POLAROID CORPORATION PHOTOGRAPHY COLLECTION A result of the collaboration between artists and the company.

POLANOID The group has set up a series of initiatives around Polarod technology showcasing the most dynamic and creative aspects of it.

Vintage Images from WILSON CENTER FOR PHOTOGRAPHY about the First Seen, 19th century photographs taken by the first artists to explore the East.

Guest ISABEL COIXET a special commission from the Spanish filmmaker for C PHOTO.

Scope/Portfolio
ALEX PRAGER Costumes, stagings, special effects. A clear cinematographic influence, and a style that has already become a genre in photography.

FEDERIC BRENNER The French photographer presents a comprehensive work on the Jewish Diaspora. A series of portraits of the community.

HIROSHI WANTANABE His photos compel us to involve ourselves in a universe that is perfect.

RAMALLAH UNDERGROUND A group of musicians living in Ramallah, Palestine. Here is a series of collages and poems of them.

ROCKY SCHENCK Photographs that lean clearly towards the noir and reveal a classical image of America.
Amongst other photographers.