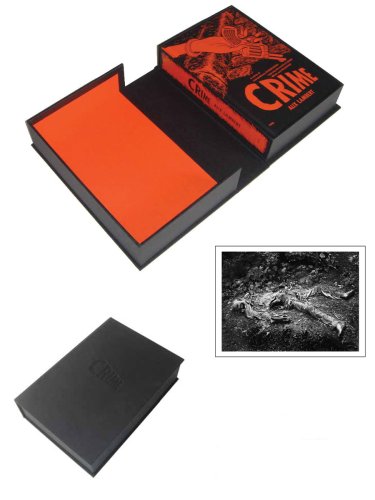 Alix Lambert: Crime: A Series Of Extraordinary Interviews
by Damon Murray
Publisher's Description
Through interviews with high profile actors, directors and authors such as Ben Affleck, Viggo Mortensen, Ice-T, Takeshi Kitano, David Cronenberg, David Mamet and Elmore Leonard, as well as unknown or infamous detectives, police chiefs, murderers, drug dealers and prison inmates, editor Alix Lambert (also a well-known visual artist, photographer of Russian prisoners' tattoos and writer for HBO's Deadwood) here uncovers both the prosaic and the extraordinary in a subject that implicates us all. This delightfully sinister-feeling signed and numbered special edition comes housed in a clothbound Solander box along with a print that is signed by Lambert. Pages are edged in red. Featuring more than 50 interviews with those who understand and are attracted to the seediest and most lethal aspects of human nature, it brings together the world of criminal transgression and its artistic counterpart-allowing a very interesting dialogue to develop between the two. Embedded within the texts, 48 black-and-white reproductions, mostly by Lambert, capture the criminals, corpses, crime scenes and the creative thinkers who contribute to this volume.