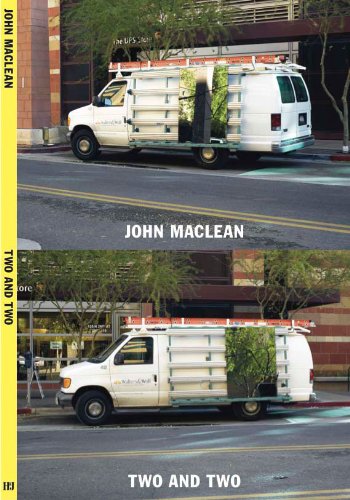 John MacLean: Two and Two
by John MacLean
Publisher's Description
John MacLean's 6th self-published book. http://www.jmaclean.co.uk/2010/06/two-and-two-2/ Signed by the Photographer Hand Numbered limited Edition of just 800 copies. Photographing the same subject twice between 2008 and 2010. A rediscovered interest in Robert Rauschenberg’s collages, particularly his twin paintings (Factum I and Factum II), had diverted my thinking in 2008 away from the single photographic image towards combinations of two or more. This, coupled with a desire to embark on a project that addressed the characteristics of the medium of photography itself, became the genesis of Two and Two – a series in which I have taken two photographs of the same subject and displayed them side by side. Two and Two asserts that there is more than one way to take every photograph, and that two different photographs of the same subject represent two distinct choices. By presenting these two choices together, I aimed to define my decision-making process and thereby learn something about my use of photographic language...
ISBN: 0955867347
Publisher: Hunter and James
Perfect Paperback Language: English