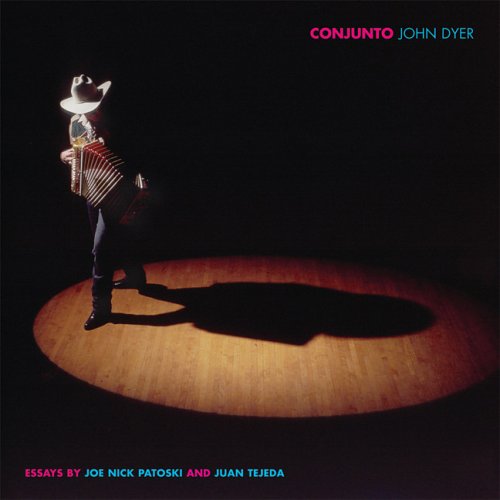 Conjunto
by John Dyer
Publisher's Description
Conjunto has been called Chicano roots music. Born when South Texas Tejanos adopted the button accordion from German settlers in the 1800s, this vibrant folk music mixes the accordion, bajo sexto guitar, bass, and drums to play lively, danceable versions of German polkas, waltzes, and schottisches, as well as Mexican corridos, boleros, rancheras, huapangos, and cumbias. A living, still evolving art form, conjunto contains the history, stories, and poems in song of Texas Mexicans even as it spreads its influence around the world and into musical genres as diverse as blues, country, rock, rap, reggae, salsa, merengue, jazz, and more.

To celebrate and honor the musicians who keep conjunto alive and growing, this book presents an album of color photographs of the most important and influential performers, as well as the dance halls and other venues where people come to enjoy their music. John Dyer captures the dynamic spirit that animates conjunto musicians in his dramatic photographs, which are captioned with micro-biographies of the performers. Interspersed among the images are English and Spanish lyrics that exemplify the poetry and themes of conjunto music.

Introducing the photographs are personal essays by Joe Nick Patoski, who describes the origins of the music and its place in contemporary life, and Juan Tejeda, who pays tribute to the importance of conjunto and of musicians such as Valerio Longoria and Tony de la Rosa. Together, the photographs and essays clearly proclaim that conjunto is a true American roots music, as vital and significant as jazz, zydeco, and country bluegrass.
ISBN: 0292709315
Publisher: University of Texas Press
Misc. Supplies : 127 pages
Language: English
Dimensions: 10.1 x 10.1 x 0.5 inches