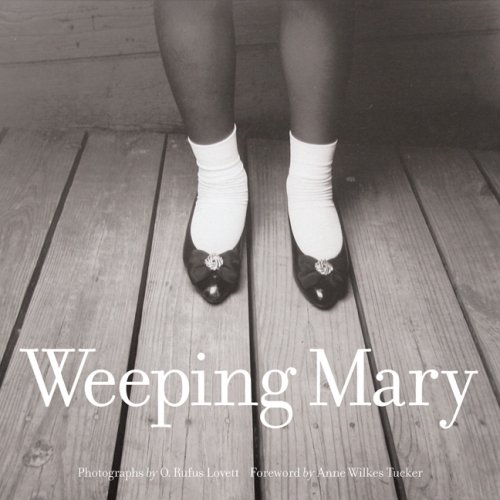 Weeping Mary
by O. Rufus Lovett
Publisher's Description
Small and self-contained, yet with ties to the larger world, Weeping Mary is a community in rural East Texas. The poetic mystery of its name, which local legend attributes to an African American woman called Mary who wept inconsolably over the loss of her land to a deceitful white man, drew photographer O. Rufus Lovett in 1994. Feeling a kinship with the people and the rhythms of a small Southern town like the one in which he grew up, Lovett began photographing the residents of Weeping Mary. In the decade since his first visit, he has created an impressive body of work that distills the essence of this unique, yet instinctively familiar community.

In this book, O. Rufus Lovett presents an eloquent photo essay on Weeping Mary, created in the tradition of such master photographers as Henri Cartier-Bresson, Walker Evans, and Helen Levitt. Focusing on the people of the community, especially the children, Lovett photographs with honesty and a deep empathy for his subjects. His beautifully composed images show a true eye for the telling details through which the character of an individual reveals itself. As a collection, the photographs create a portrait of a community rich in spirit, in which people are 'married to this place which is theirs and appears to stand still, but which subtly moves forward with the rest of the world in the twenty-first century.'

To frame the images, America's leading photography curator, Anne Wilkes Tucker, describes the community of Weeping Mary and offers a critical appreciation of Lovett's work. The volume also includes a photographer's statement and an interview in which Lovett and Tucker discuss his development as a fine art photographer and his motivations for creating this intimate portrait of Weeping Mary.