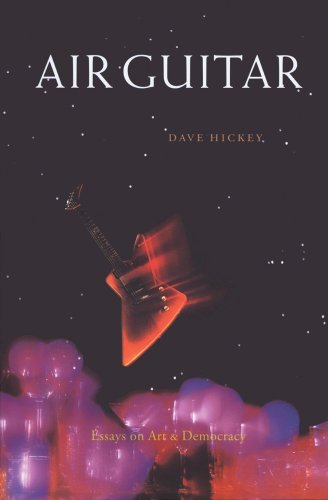 Air Guitar: Essays on Art & Democracy
by Dave Hickey
Publisher's Description
'As enjoyable and provocative a book of criticism as anyone has published in years.'
—Rolling Stone

'Dave Hickey's prose transports are like an eye attached to a butterfly attached to a rocketship—which is to say, lucidity uncannily yoked to both a deft lightness of touch and sheer gangbusters propulsion: the down-to-earth, time and again, taking off and taking flight. The generosity of the man's verve—the suppleness of its profusions—can get to be downright ravishing. On top of which, the guy's really funny.'
—Lawrence Weschler, critic, The New Yorker

Air Guitar is Dave Hickey's 'memoir without tears'—a journey through the vernacular cultural landscape of the United States in the second half of the twentieth century. Looking back from the vantage-point of his adopted hometown of Las Vegas, Hickey speculates on everything from jazz and rock-and-roll to basketball and professional wrestling—from magic and psychedelia to gambling and the culture of 'little stores'—from automotive design to series television to Saturday-morning cartoons. The emphasis in these 23 essays is on the way the arts function in the drift of everyday life, outside the venues of official culture, and on singular 'lives in the arts,' lived outside those venues, with meditations on the careers of Liberace, Hank Williams, Chet Baker, Andy Warhol, Johnny Mercer, Norman Rockwell, magicians Siegfried & Roy, and wrestler Lady Godiva. Underlying Hickey's writing is an abiding belief that cultural life in a democracy can (and occasionally does) function in a democratic manner, sustained by the whims of affection and the commerce of opinion.
ISBN: 0963726455
Publisher: Art Issues Press
Paperback : 208 pages
Language: English
Dimensions: 5.9 x 8.9 x 0.7 inches