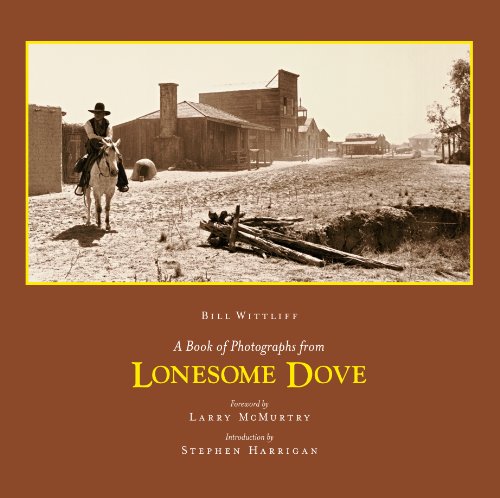 A Book of Photographs from Lonesome Dove (Southwestern & Mexican Photography Series, Wittliff Collections at Texas State University-San Marcos)
by Stephen Harrigan
Publisher's Description
Lonesome Dove—Larry McMurtry's epic tale of two aging Texas Rangers who drive a herd of stolen cattle 2,500 miles from the Rio Grande to Montana to found the first ranch there—captured the public imagination and has never let it go. The novel, published in 1985, was a New York Times best seller and won the Pulitzer Prize for fiction. More than two decades after publication, it still sells tens of thousands of copies every year.

The Lonesome Dove miniseries, which first aired on CBS in 1989, lassoed an even wider audience. Twenty-six million households watched the premier episode, and countless millions more have ridden with Gus and Call each time the movie has rerun on TV, video, and DVD. In addition to its popular success, the miniseries has also garnered unanimous critical acclaim. It was nominated for eighteen Emmy Awards and won seven. It also won Golden Globe Awards for Best Television Miniseries and Best Actor; a Peabody Award; the D. W. Griffith Award for Best Television Series; the National Association of Television Critics Award for Program of the Year and Outstanding Achievement in Drama; and the Writers' Guild of America Award for Best Teleplay (Bill Wittliff).

Now bringing the sweeping visual imagery of the miniseries to the printed page, A Book of Photographs from Lonesome Dove presents more than one hundred classic images created by Bill Wittliff, the award-winning writer and executive producer (with Suzanne de Passe) of Lonesome Dove and a renowned fine art photographer. Wittliff took these photographs during the filming of the miniseries, but they are worlds apart from ordinary production stills. Reminiscent of the nineteenth-century cowboy photographs of Erwin Smith and the western paintings of Frederic Remington and Charles M. Russell, each Lonesome Dove image stands alone as an evocative work of art, while as a whole, they provide a stunning visual summary of the entire miniseries.

Accompanying the photographs are a foreword by Lonesome Dove author Larry McMurtry and an introduction by Stephen Harrigan, who describes the epic-in-itself creative journey that led to the making of the Lonesome Dove novel, miniseries, and book of photographs. In the afterword, Bill Wittliff recalls unforgettable moments—some hilarious, others momentous—from the production of the miniseries. A roster of the cast and crew completes the text.

As its enduring popularity proves, Lonesome Dove conveys the spirit of the American West and the freedom of the open plains and sky as few other creative works ever have. For everyone who loves the novel and the movie, A Book of Photographs from Lonesome Dove provides yet another powerful way of experiencing this mythical, yet wholly real, world.
ISBN: 0292713118
Publisher: University of Texas Press
Hardcover : 188 pages
Language: English
Dimensions: 12.3 x 12.3 x 1 inches