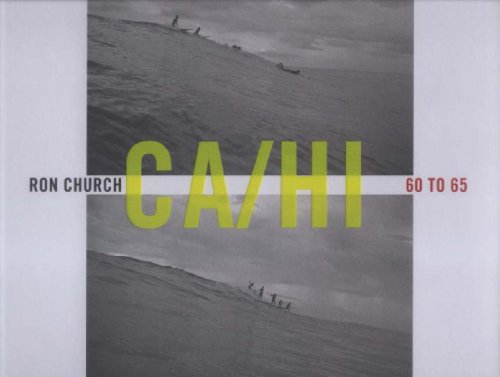 Ron Church: California to Hawaii 1960 to 1965
by Steve Pezman
Publisher's Description
Co-published by T. Adler Books and the wave-rider's Bible, The Surfer's Journal, this deluxe collection of mostly previously-unpublished vintage surfing photographs by the cult surf documentarian, Ron Church, offers a glimpse into the last moments of a small and innocent brand of west coast surf culture before it became swallowed up by today's wave jockeying, plastic surfboards and manufactured surf wear, to say nothing of the surf media. Church, who died at age 39 in 1973, was an amateur surfer himself, as well as an adventurer and a cameraman with the deep-sea explorer, Jacques Cousteau. In photographing his peers, Church preferred to paddle out with his waterproof equipment, shooting low to the water and far from shore, as if he were stalking a population of fantastic, water-walking sea creatures rather than marveling over specimens of a funky new kind of athleticism. He was among the earliest photographers to take a professional interest in the sport from any angle. In order to assemble this volume, publisher Tom Adler scoured Church's long-defunct proof sheet binders, maintained for decades by his widow. Provoked by their sheer volume, Adler selected the more offbeat moments from Church's multi-image studies, piecing together an evocative, often moody collection.
ISBN: 0966377184
Publisher: T. Adler Books/ The Surfer's Journal
Hardcover : 180 pages
Language: English