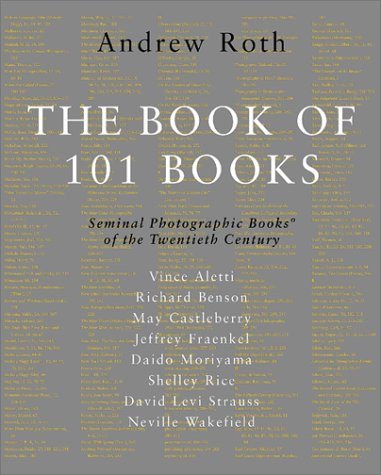 Deluxe Edition of 101: bound in leather and slipcased

The history of the photographic book goes back well more than a century; the medium of photography and the book format were understood very early on to relate to each other on both technical and aesthetic levels. The examples of truly great combinations of photographic image and text, great design and typography bound together as books are numerous, and make up an impressive artistic, social, and documentary statement of the l0th century. Writer and rare book expert Andrew Roth has selected for this volume a group of 101 of the best photography books ever published: books that bring all of the elements of great bookmaking together to create, ultimately, a thing of beauty, a work of art. Mostly made up of publications in which the photographs were meant to be seen in book form, as opposed to the book being merely a repository of images, this list includes many artists and titles that will be familiar to the collector, but also not a few surprises. Chronologically, the first book is Volume One of Edward Curtis's seminal 1907 The North American Indian, the last is David LaChapelle's LaChapelle Land from 1996, and in between are books by Walker Evans and Berenice Abbott, Atget and Brassai, Robert Frank and Garry Winogrand, and many other seminal photographers from all over the world. Each book in the catalogue will receive a double page spread which will include publication information, several image spreads, and a short text about it. The Book of 101 Books, however, is far more than simply an annotated and illustrated catalogue. Six important new essays on a variety of related topics from respected scholars, critics, and artists are included as well: here you will find Richard Benson on the history of printing techniques, Shelley Rice on the societal significance of photography books, May Castleberry on reprints, exhibitions, and keeping books alive for the public; Daido Moriyama on his personal memories of making his classic Bye Bye Photography, Dear, Neville Wakefield on the particular attributes of one of the most recent books in this group: Richard Prince's 1995 Adult Comedy Action Drama, and Jeffrey Fraenkel on the myriad perils of publishing photography books. The catalogue entries themselves are written by the well known critics Vince Aletti and David Levi Strauss.Taken together, the depth and beauty of these essays and images will make The Book of 101 Books both an essential reference and an aesthetically compelling object.

Vince Aletti's writings as Photography Critic at the Village Voice have estab-lished him as a seminal force in photography; his annual roundup of the year's best photo books is an essential guide. Richard Benson, Dean of the Yale University School of Art for the last five years, and a professor of photography there for the last 20, is an internationally renowned expert on photographic printing. May Castleberry, currently the Editor for the Library Council at the Museum of Modern Art in New York, was formerly a Librarian and Associate Curator at the Whitney Museum of American Art. Jeffrey Fraenkel founded his gallery in San Francisco in 1979; he represents the work of such seminal artists as Diane Arbus, Carleton Watkins, and Garry Winogrand. Daido Moriyama, one of Japan's leading postwar photographers, had a major traveling retrospective that opened at the San Francisco Museum of Modern Art in 1999. Shelley Rice has taught and published widely in the United States and abroad. Her book Parisian Views received wide acclaim, while her articles have appeared in The New Republic, Art in America, and ArtForum. Andrew Roth is a gallerist, rare book expert, and publisher. He is co-owner of Roth Horowitz Gallery, which specializes in vintage and contemporary photography and rare photographic books. David Levi Strauss, a highly respected writer and critic, currently teaches at New York University. Among his books are Francesca Woodman and Miguel Rio Branco. Neville Wakefield's writings on art have been published in magazines, including ArtForum, Vogue, and Elle Decor. He has written texts for the monographs of such artists as Matthew Barney, Vija Celmins, Adam Fuss, Nan Goldin, and Wolfgang Tillmans.
ISBN: 096707746X
Publisher: Roth Horowitz, LLC
Hardcover : 320 pages
Language: English