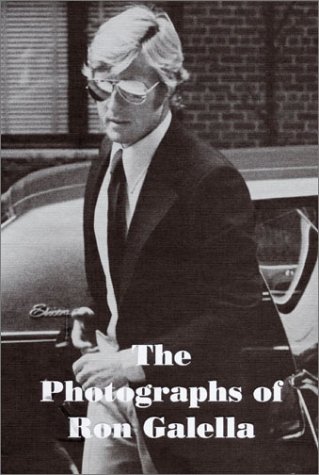 Voyeur. Bandit. Hound. Ron Galella has been called every name in the book. In 1955, fresh out of the United States Air Force, he became a paparazzo-and redefined the genre. From his notoriously obsessive treatment of Jackie Onassis and the subsequent legal battles associated with it, to his alarmingly beautiful photographs 0f celebrities in the 60s and 70s, Galella has always been in a category of his own. Possessed 0f a unique talent to catch stars at moments when they seemed most alive, most human, most stylish, Galella was able to do something no other celebrity watcher was able to do: become a star himself.

Born in the Bronx, New York, in 1931, Ron Galella graduated from the Art Center College of Design in Pasadena, California, with a degree in professional arts. During the Korean War, he was a ground and air photographer for the United States Air Force. In 1955, he became a freelance magazine and newspaper photographer, and went on to work for hundreds of publications around the world, including Time, LIFE, Harper's Bazaar, Vogue, Vanity Fair, W, The New Yorker, The New York Times, and Rolling Stone. America's most controversial celebrity photographer, he was dubbed 'paparazzo extraordinaire' by Newsweek, featured on the cover of LIFE, punched in the jaw by Marlon Brando, beaten up by Richard Burton's bodyguards, and hosed down by Brigitte Bardot.

'Featuring images of Jackie Onassis, Frank Sinatra, Elvis Presley, Cher, Liz Taylor, Marlon Brando, Farrah Fawcett, Robert Redford, Raquel Welch, Mick Jagger, and just about every other celebrity you can think of.
Warhol voiced respect for the work of Man Ray, Irving Penn, Weegee... but his answer for interviewers was usually that his favorite was Ron Galella. The reporters thought this was a joke... but it was not.'
-from the J. Paul Getty Museum's NadarlWarhol: Paris/New York
ISBN: 0967236665
Publisher: Greybull Press
Hardcover : 248 pages
Language: English