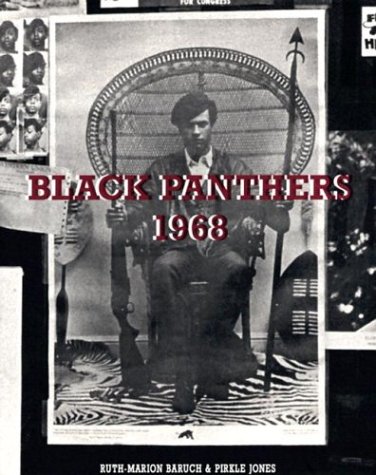 In 1968, FBI chief J. Edgar Hoover vilified the Black Panthers as the greatest threat to the internal security of the United States. That same year photographers Pirkle Jones and wife, Ruth-Marion Baruch, documented the Black Panthers for an exhibition at the De Young Museum in San Francisco. Their hope was to expose the public to the Panthers as they saw them-symbols of pride and strength-rather than the way they were being portrayed in the media. Jones and Baruch were given unprecedented access to the inner circle of the Black Panther Party. At intimate meetings, family gatherings and public demonstrations, we witness, through these incredibly moving photographs, a unique crusade for dignity and self-definition. Black Panthers is a historic documentation of this fascinating movement, so challenging and controversial to our culture that it was virtually erased from established texts and American history books.

Kathleen Neal Cleaver has spent most of her life participating in the human rights struggle. In 1966, as a college sophomore, she dropped out of Barnard College to work full time with the Student Nonviolent Coordinating Committee, and from 1967 to 1971 she was the Communications Secretary of the Black Panther Party, the first woman member of their Central Committee. Cleaver holds a law degree from Yale Law School, served on the Georgia Supreme Court Commission on Racial and Ethnic Bias, and was a board member of the Atlanta-based Southern Center for Human Rights. Professor Cleaver has been a visiting faculty member at Benjamin N. Cardozo School of Law in New York, The Graduate School of Yale University, and Sarah Lawrence College. She serves as executive producer of the International Black Panther Film Festival and her writing has appeared in numerous magazines and newspapers, including The Village Voice and The Boston Globe. She has contributed scholarly essays to several books and is co-editor of a recently published collection of essays, Liberation, Imagination, and the Black Panther Party.
ISBN: 096723669X
Publisher: Greybull Press
Hardcover : 152 pages
Language: English