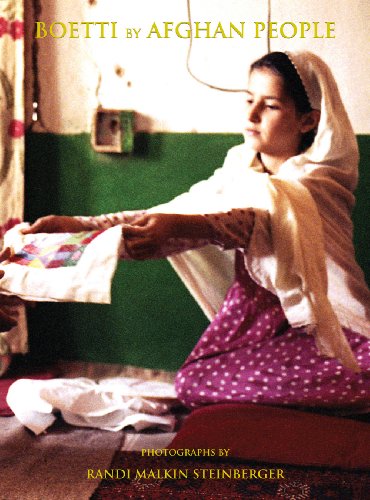 Boetti By Afghan People: Peshawar, Pakistan 1990 - Photographs by Randi Malkin Steinberger
by Randi Malkin Steinberger
Publisher's Description
More than 15 years after Italian artist Alighiero Boetti’s death, 2011 marks the opening of a major international retrospective of the work of the Arte Povera master, sponsored by MoMA NY, the Tate Modern and Madrid’s Reina Sofia. Adding to the new appreciation of Boetti’s joyous work is this dazzling, multi-layered photo essay on the unseen story behind the making of his seminal arazzi (embroidered works). For the first time, the international web of artisans who made the arazzi comes into focus, through the work of American photographer Randi Malkin Steinberger.

In 1990, Steinberger traveled to Peshawar, Pakistan, with Boetti’s blessing, to document how the Afghan refugee women realized the embroideries which Boetti had outlined. Steinberger, traveling with a Boetti assistant, followed “the journey of the cloths” into the craftswomen’s workrooms as they brought color to these spectacular works. When Steinberger returned to Rome, she and Boetti worked together to choose 55 color photographs for a future book. Now, two decades after the photos were taken, they are being published for the first time in this beautiful edition.

Boetti often said that he considered his art a way to communicate across the globe, and that the resulting works were owned as much by the women who realized the embroidery as by the artist himself. Now, their story is revealed, and their work can be celebrated as Boetti intended.