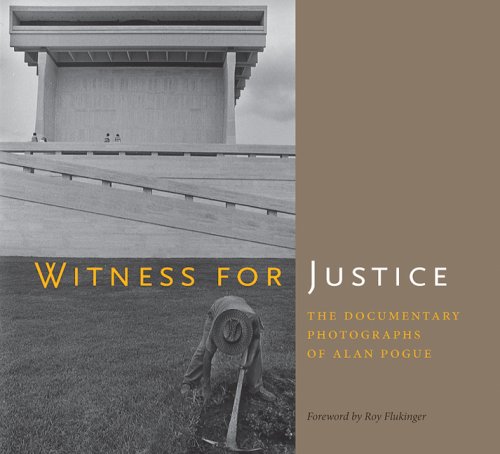 Witness for Justice: The Documentary Photographs of Alan Pogue (Bill and Alice Wright Photography Series)
by Alan Pogue
Publisher's Description
Alan Pogue began taking photographs during the Vietnam War, prompted by 'an urge to record what shocked me as well as what was beautiful.' His desire to bear witness to the full range of human experience matured into a career in documentary photography that has spanned four decades and many parts of the globe from his native Texas to the Middle East. Working in the tradition of socially committed photographers such as Jacob Riis, Lewis Hine, and the photographers of the Farm Security Administration, particularly Russell Lee and Dorothea Lange, Pogue has been a witness for justice, using the camera to capture the human context and to call attention to conditions needing remediation.

This book offers a comprehensive visual survey of Alan Pogue's documentary photography. It opens with images of social protests of the 1960s and early 1970s, along with the countercultural scene around Austin, Texas, and prominent cultural and political figures, from William Burroughs and Allen Ginsberg to Ann Richards and George W. Bush. Following these are suites of images that record the often harsh conditions of farm workers, immigrants, and prisoners—groups for whom Pogue has long felt deep empathy. Reflecting the progression of Pogue's career beyond Texas and the Southwest, the concluding suites of images capture social conditions in several Latin American and Caribbean countries (El Salvador, Nicaragua, Cuba, Puerto Rico, Mexico, and Haiti), the effects of the Israeli-Palestinian conflict on ordinary people, and the lives and privations of Iraqis between the two recent wars.
ISBN: 0292717229
Publisher: University of Texas Press
Hardcover : 156 pages
Language: English
Dimensions: 11 x 10 x 0.8 inches