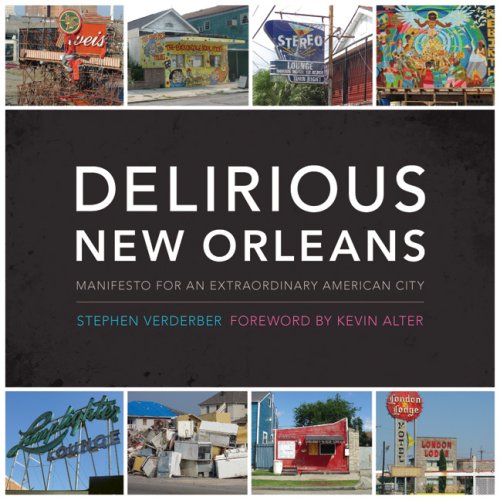 Delirious New Orleans: Manifesto for an Extraordinary American City (Roger Fullington Series in Architecture)
by Stephen Verderber
Publisher's Description
From iconic neighborhoods such as the French Quarter and the Garden District to more economically modest but no less culturally vibrant areas, architecture is a key element that makes New Orleans an extraordinary American city. Delirious New Orleans began as a documentary project to capture the idiosyncratic vernacular architecture and artifacts—vintage mom-and-pop businesses, roadside motels, live music clubs, neon signs, wall murals, fast-food joints, and so on—that helped give the city's various neighborhoods their unique character. But because so many of these places and artifacts were devastated by Hurricane Katrina, Delirious New Orleans has become both a historical record of what existed in the past and a blueprint for what must be rebuilt and restored to retain the city's unique multicultural landscape.

Stephen Verderber starts with the premise that New Orleans's often-overlooked neighborhoods imbue the city with deep authenticity as a place. He opens Delirious New Orleans with a photo-essay that vividly presents this vernacular architecture and its artifacts, both before Katrina and in its immediate aftermath. In the following sections of the book, which are also heavily illustrated, Verderber takes us on a tour of the city's commercial vernacular architecture, as well as the expressive folk architecture of its African American neighborhoods. He discusses how the built environment was profoundly shaped by New Orleans's history of race and class inequities and political maneuvering, along with its peculiar, below-sea-level geography. Verderber also considers the aftermath of Katrina and the armada of faceless FEMA trailers that have, at least temporarily and by default, transformed this urban landscape.
ISBN: 0292717539
Publisher: University of Texas Press
Hardcover : 266 pages
Language: English
Dimensions: 10.1 x 10.2 x 1.1 inches