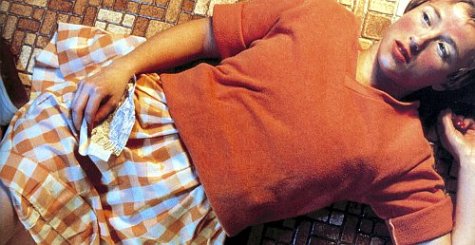 Cindy Sherman: Centerfolds
by Cindy Sherman
Publisher's Description
Described by one critic as 'embarrassingly intimate,' Cindy Sherman's Centerfolds, a series of twelve 2 x 4 foot images shot in 1981 for an Artforum commission, take the horizontal centerfold as their physical and conceptual framework. Though the images were never run in the magazine-the editor was concerned that they would be misunderstood-they remain some of the most affecting of Sherman's constructed pictures. In them, Sherman's vaguely adolescent female characters fill up the frame with an ambiguous, uncomfortably close presence, their plaid kilts, wet t-shirts, matted hair, disheveled nightgowns, and pretty gingham dresses keeping them in your face but unavailable, emotionally suggestive but ambivalently distanced. This handsome, compact volume, the first to include all twelve of the Centerfold images, is run through with an informative, involved text by Lisa Phillips, Head Curator of the New Museum and a long-time supporter of Sherman's work.
ISBN: 0970909020
Publisher: Skarstedt Fine Art
Hardcover : 44 pages
Language: English