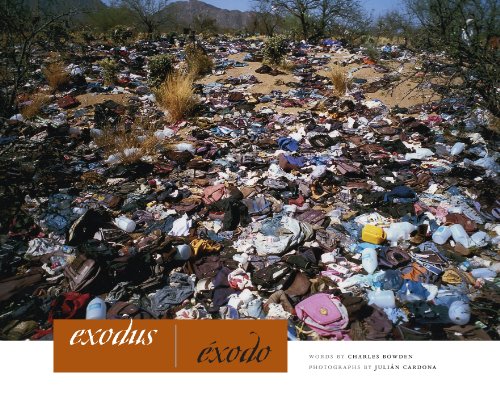 Exodus/Éxodo (Bill and Alice Wright Photography Series)
by Julián Cardona
Publisher's Description
Immigration has become one of the most important and contentious issues of our time. But even as policy makers in the United States and Mexico argue over what to do about the half million or more Mexicans who cross the border illegally each year to work in the United States, one fact has become indisputable. Illegal immigration has enhanced the lives of poor people more than any policy attempted by either the U.S. or the Mexican governments. Immigrants sent home $23 billion dollars in 2006 alone, rivaling what Mexico earned from selling oil. But the human cost of migration is equally high. Border crossers risk injury, attack, rape, and death, while undocumented workers often toil under dangerous and exploitative conditions in the United States.

These harsh realities constitute the heart of Exodus/Éxodo, a powerful collaboration between writer Charles Bowden and photographer Julián Cardona that puts a human face on the issue of illegal immigration. Expanding on their award-winning 2006 Mother Jones article titled 'Exodus: Border-Crossers Forge a New America,' Bowden and Cardona take us to border towns, in which impoverished men and women hire 'coyotes' to get them across the line; to Ciudad Juárez, where hundreds of young women maquiladora workers have been murdered and their families still seek justice; to Minutemen camps along the border, where citizen vigilantes keep watch; to New Orleans, North Carolina, and California, where migrants find back-breaking work in construction, agriculture, and other industries; to protest marches, as immigrants assert their right to stay in the United States; and to villages in Mexico, in which remitted dollars are building homes as lavish as the dreams that fuel the migrations.
ISBN: 0292718144
Publisher: University of Texas Press
Hardcover : 295 pages
Language: English
Dimensions: 11.8 x 9.6 x 1.2 inches