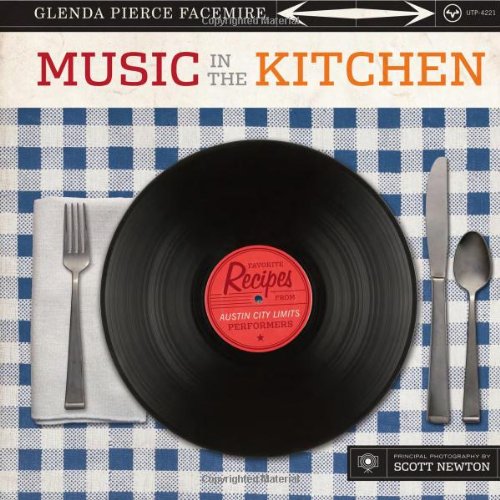 Music in the Kitchen: Favorite Recipes from Austin City Limits Performers (Jack and Doris Smothers Series in Texas History, Life, and Culture)
by Leigh Anne Jasheway-Bryant
Publisher's Description
With a musical mix that free ranges from progressive country to rock'n'roll, jazz, Texas swing, Latin, blues, pop, bluegrass, and world music, Austin City Limits inspires and entertains millions of fans around the globe. Created by Austin's PBS television station KLRU in 1974 and winner of countless awards (including the National Medal of the Arts from the National Endowment for the Arts) since, ACL is now the longest-running show on PBS, as well as an annual music festival that draws tens of thousands of music lovers to the 'Live Music Capital of the World.'

As the show celebrates its thirty-fifth anniversary in 2009, Music in the Kitchen offers a unique, highly flavorful way to connect with ACL through the favorite recipes of some 130 artists who've appeared on its stage. From Willie Nelson's 'Willie's Tequila-Mango Salsa' to Roseanne Cash's 'Roast Lemon Chicken with Carrots and Onions,' Joss Stone's 'Veggie Lasagna,' My Morning Jacket's 'Quinoa Eggs with Cheese, Please!' and Shawn Colvin's 'Swedish Pancakes,' these are some of the most authentic family recipes for everything from zesty appetizers to scrumptious desserts. Not surprisingly, the recipes reflect the diverse national and international roots of the performers, who tell interesting and flavorful stories of what these dishes mean to them and their families. Glenda Facemire introduces the recipes with brief biographies that highlight not only the artists' musical careers and achievements but also their contributions to society beyond music, as well as their favorite charities. Striking color photographs of the performers make this book a feast for the eyes as well as the palate.

Music in the Kitchen's tasty mix of food, family stories, photos, and backstage insights collected and compiled by an ACL veteran will make you feel like you're right there on the set as you whip up these recipes in your own kitchen. Good entertainment, good eating, and good listening, y'all!
ISBN: 0292718152
Publisher: University of Texas Press
Hardcover : 319 pages
Language: English
Dimensions: 10.2 x 10 x 1.2 inches